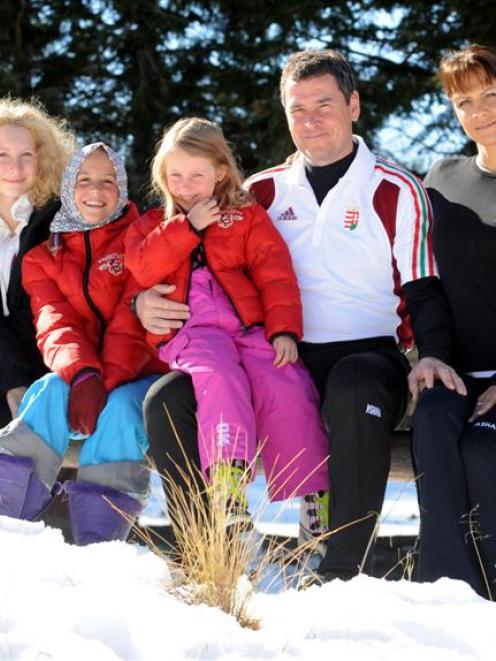 Their three daughters - Bianka (13), Laura (9) and Lola (5) - were the support party when their parents played in the mixed doubles at the Maniototo International Curling Rink this week.

"It is our August summer holidays in Europe, so we thought we would come to New Zealand and bring the girls with us," Nagy (46) said.

"We wanted a sport we could play together," Nagy said. "In mixed double, we can play as a team."

Nagy, a financier, and Szekeres, a teacher, made rapid progress in the sport and represented Hungary for the first time in 2003. Their best international performance came in 2009, when they won a silver medal in the mixed doubles world championships.

They are the elite of the 200 curlers in Hungary, a country that ranks 20th in the world.

There is only one curling rink in Budapest, the capital.

"Curling is a very strong sport in Europe," Nagy said. "You need to be fit and also mentally strong."

His wife enjoys the high pressure of international curling. "The more the adrenaline flows, the better I like it," she said. "It's fun. You never get bored."

The family has enjoyed staying in the curling town of Naseby. There is plenty of snow for the children to enjoy themselves.

The Hungarians won their third game at the Winter Games when they comfortably beat the Finland pair of Katja Kiiskinen and Paavo Kuosmanen 10-4.

The New Zealand combination of Bridget Becker and Sean Becker had a crucial win when they beat the Swiss pair of Irene Schori and Reto Seiler 7-5 on the extra end.

New Zealand leads the round robin competition with China, with four wins from five games.

China played its sixth game when it beat the United States 9-4 yesterday.

Latvia had an important 9-7 win against Japan. These two teams are in third spot with three wins from five games.

China is unbeaten in the women's competition with five wins It easily beat Korea 9-3 yesterday. Japan, with four wins, was beaten by China 8-2 on Monday.