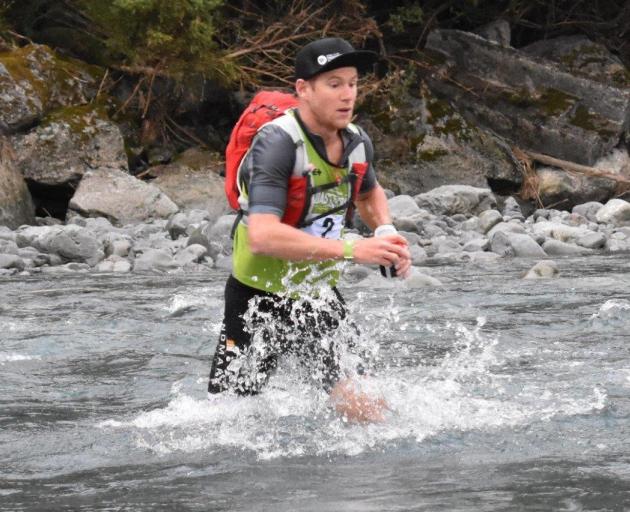 Dougal Allan works his way through a stream at last year’s Coast to Coast event. PHOTOS: WAYNE PARSONS
One of multisport’s most respected campaigners, Dougal Allan is favoured to lift a second world championship Longest Day title at the Coast to Coast tomorrow.

The Wanaka-based athlete and defending champion of the world championship of multisport, was a finalist for the Otago Sportsman of the Year in 2019, and a successful defence of the title tomorrow will surely put him in the mix again.

"You know you must have done something special to be recognised alongside the likes of Ben Smith," he said of being one of the three finalists for Otago Sportsman of the year last year.

The race is looming as an epic encounter.

Three-time champion Sam Clark (Tauranga) is returning for a tilt at a fourth title, and while he and Allan are at short odds, it would come as no surprise to see Dunedin’s Three Peaks champion Hamish Elliott and the Canterbury pair of Bobby Dean and Ryan Kiesanowski feature in the final wash-up.

Kiesanowki and Elliott got a glimpse of the class of Allan first hand when they finished third and fourth respectively to him in Twizel’s Weekend of Hard Labour race last October.

Victory for Allan tomorrow under the guidance of his Halberg Award-winning coach Gordon Walker, would remove all doubts as to the rightful holder of the world championship crown, as Clark did not attempt a fourth consecutive title last year.

However, his return this year adds further spice to the elite men’s field and has all the hallmarks of Clark’s second victory, when he defeated three-time champion Braden Currie (Wanaka) in 2017, after Currie withdrew from the 2016 race, as he sought Olympic Games selection. 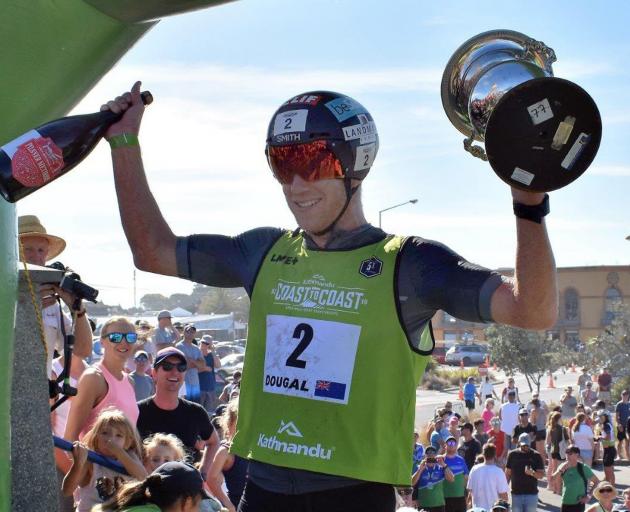 Dougal Allan with the victory spoils after winning last year’s Coast to Coast.
That race (between Clark and Currie) was memorable for Clark’s pace judgement and riding down Currie on the 70km cycle to the finish at New Brighton. This stage could well determine victory again this year, as somewhat of a match-race scenario looms between Clark and Allan; both athletes are known for a mean "game face" and playing a cagey end game tactic over the early stages.

Not since 2010 has a match race taken place on the 243km course when, ironically, it involved Allan and his now coach Walker. Walker only got the jump on Allan over the closing stages.

"That South Eyre Rd is going to have plenty of action on it, I think," Allan said of the 24km stretch of straight road as the final stage turns from Oxford 8km into the 70km cycle stage. He added that the Coast to Coast race was a unique event and there were no second chances.

"I don’t get too carried away over the early stages, as it’s a long day and the race involves a very unforgiving course."

After winning the two-day title in 2008, Allan appeared to be stuck with the bridesmaid tag following the 2010 result, as he was second again in 2011 and 2012, and third in 2013, before embarking on a successful association with ironman. His return to multisport was almost simultaneous with his Longest Day victory last year. The victory came against some seasoned internationals that included Alex Hunt and James Pretto of Australia, who were each seeking to be the first non-New Zealander to win the coveted crown since John Jacoby (Australia) in 1993 and Rockley Montgomery (South Africa) in 1992. Jacoby also won the title in 1988 and 1989.

Of making his return to multisport after a five-year hiatus with ironman, Allan said that the desire to continue at the highest level in multisport had never left him — it was merely a confidence thing.

If last year’s result proved one thing, it was that Allan is not lacking in self belief, and to quote two-time Olympic gold medallist Mia Hamm, "success breeds success" — those are words of wisdom Allan will be sure to take into tomorrow’s race.

Allan said he had targeted some specific skill sets over the past four months as part of his preparation.

"You are hopping over rocks for three hours and white water kayaking for four hours. If you don’t get it right and have a bad day, then your race is done and you have to wait another year. There is no second chance. You need all your eggs in one basket for the whole day."

Allan added that he felt stronger, fitter and better prepared than last year, and that being able to make a successful defence of the world championship crown was about execution.

"If I can tick the preparation and execution boxes, then I’ll be hard to beat."