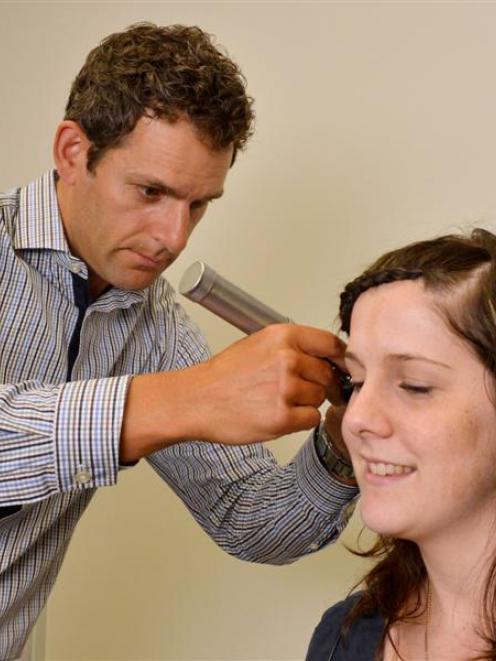 Anthony Rowcroft checks Shannon King's hearing at Bay Audiology, in Dunedin. Photo by Gerard O'Brien.
Anthony Rowcroft once anchored club rugby backlines but his only support players as he takes on the Coast to Coast will be running the sidelines.

Rowcroft (40) played centre for Otago University, alongside players such as All Black Marc Ellis and Scottish international John Leslie, and helped University A win a fourth consecutive title in 1994.

The year before, he featured in a strong University B side that won the premier grade middle four section, playing alongside Otago sevens coach Roy Hawker.

Injury kept him out of the premier semifinal and final in 1995, the year Dunedin denied University A a fifth straight banner.

Study in audiology took him from Dunedin to Auckland University, and rugby became a strictly social option.

''I was always small for a centre,'' Rowcroft said.

''My attempt to bulk up was always countered by attempts to get fit. Hence, I've always been on the skinny side. I used to spend my summers in the gym trying to bulk up for rugby, with limited success.

''But now weight is not your friend. You don't want to be big and bulky and have extra weight to carry up mountains.''

After combining social rugby with various fun runs in Auckland for five years, Rowcroft returned to Dunedin, playing for Kaikorai in 2001. Despite the presence of former All Black Byron Kelleher and former Scottish international Brendan Laney, the side lost to Pirates in the semifinal.

After that, Rowcroft's audiology career took over and he found he could not commit to a team sport.

He dabbled in mountain biking, cycling and duathlon, and completed the odd half-marathon. He had not run competitively since attending Otago Boys' High School, when he was in the school cross-country team and finished second in the Otago-Southland championships.

Rowcroft's desire to cross a Coast to Coast off his bucket list has sent him into the great unknown.

''It's just one of those things you think you need to do.''

Juggling a busy workload and family with the demands of training for the 243km event next weekend, Rowcroft put himself under the coaching regime of Dunedin-based sports scientist Matty Graham.

''This year would be the first year I have trained to a programme,'' he said.

''I've never really trained seriously like I have this year. Experienced endurance athletes would not think it particularly special, what I'm doing. It's a huge step up for me in terms of the hours I'm putting into it.''

Rowcroft has the support of a sporting family. His wife, Tiffany, was an accomplished sprinter until tennis intervened in her teenage years. Daughters Gemma (8) and Holly (6) are actively involved in a range of sports, including athletics, swimming and netball. Holly, perhaps showing signs of following her father down the multisport path, had an impressive performance in the Weet-Bix Tryathlon last year.

They will play an important part in Rowcroft's support crew during the race, along with mountain biking and poker friends Jimmy Sunderland and Geoff Thompson.

Rowcroft remains realistic about his chances in the Coast to Coast, but after contesting the Waimakariri and Clutha river classics last month, he is beginning to feel confident.

''I'll probably be disappointed if I wasn't in the top half,'' he said.

''A good day would be no punctures and no swims out of the kayak.''

As for the alpine run, Rowcroft, with a best half-marathon time of 1hr 24min, believes the key is to pick the right line up Deception Valley.

He will carry plenty of advice from Graham, who has contested the event six times.

''This event has such an aura about it. It's such an iconic event. People say you can't call yourself a multisporter until you've done a Coast to Coast.''

Rowcroft is entered in the two-day individual section of the 140km bike, 36km alpine run and 67km kayak event.