One step at a time approach for NZ 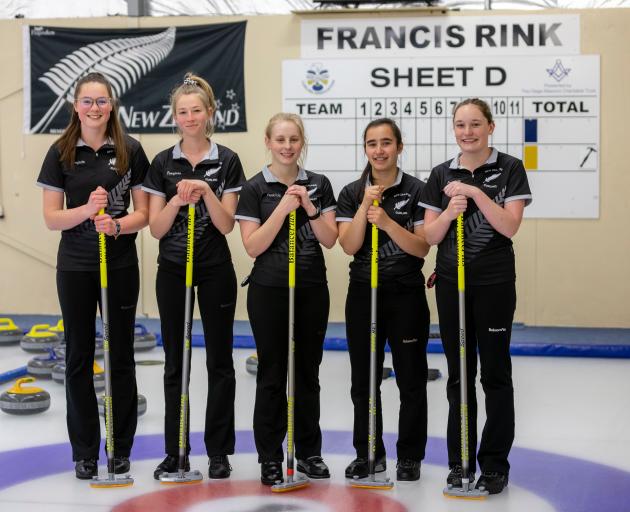 The New Zealand under-21 curling team of (from left) Rachael Pitts, Zoe Harman, Courtney Smith, Grace Apuwai-Bishop, Lucy Neilson leaves for the world junior championships today. Photo: Supplied
The stakes may be higher, but the game is no different.

That will be key to remember for the new-look New Zealand women’s team which leaves today for the world junior championships in Finland.

After three years of consistency in the under-21 team’s line-up, only Dunedin student Courtney Smith (20) and the Maniototo’s Lucy Neilson (17) return for this year’s championships.

That duo will take on the skip and lead roles respectively

They are joined by Dunedin pair Grace Apuwai-Bishop (18) and Rachael Pitts (16), the third and alternative respectively.

Maniototo’s Zoe Harman (15), the second, rounds out the team.

The side will look to finish in the top three to qualify for the full world championships in Russia, which the men’s team has already done.

To do that, it will first have to advance out of its pool, which includes Australia and several European countries.

It had been training well and had been successful in its practice matches, including three wins over the Australian women’s team.

Skip Smith, who lives in the Maniototo outside of the university semester, is in her fourth year with the team.

Her experience, which includes placing fourth last year, will be critical.

She said it was important the team treated the matches the same as any other.

‘‘That’s one of the things we’ve talked about.

‘‘We’re lucky the boys started a day before us so we had a day the girls could sit and watch.

‘‘We sat down a couple of weeks ago and I said it’s no different to throwing a stone at home.

‘‘But nothing changes, you’re playing with your team, it’s just another day at the office.

‘‘When you get on to that stage it’s about not becoming overwhelmed with it, just focusing on the task ahead.’’

She felt the team was capable of doing well.

However, it was important not to get too caught up everything and just focus on what was next.

‘‘Just one step at a time, keeping it small and not getting overwhelmed on the big picture.

The tournament begins on December 12 when New Zealand plays Denmark and Germany.