Tori Peeters has an eye on making it to Birmingham and Oregon later this year. 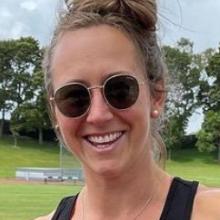 Tori Peeters
The former Otago javelin thrower has already made a good case for the former, which will host the Commonwealth Games.

The latter, for the world championships, will be more of a challenge.

It is a challenge Peeters feels she is capable of rising to, though.

A return to her long-time home track will be her first chance of getting there.

Peeters, who now lives in Cambridge, will be one of the stars at tonight’s Yvette Williams Memorial Meeting at the Caledonian Ground.

She will compete in the women’s javelin in a field that also includes Paralympic gold medallist Holly Robinson.

"It’s been a while since I’ve been down in Dunedin and competed down there," Peeters (27) said.

"It’s always nice to come back to the old stomping ground and catch up with all the people I haven’t seen in a few years as well. So it’ll be good."

It will begin a summer in which Peeters has hopes of qualifying for both the Commonwealth Games and world championships.

She has already surpassed the Games B standard qualifying mark of 59m four times during the qualification period.

However, she hopes to surpass 61.50m, the A standard, to cement her spot in the team.

That is a mark she has gone past before. Her personal best in 62.04m, and she is confident of breaking it again.

The world championships would pose a bigger challenge — either a throw of 64m, or accumulating enough points over time.

She felt that was within reach, too, although it may require going to Europe if it became a case of needing points.

After contending with injuries last season, a solid six-month block of training had left her with a solid base to build.

She was not putting pressure on herself to throw any particular distance tonight, although she felt she was in good shape.

"I guess you like to think you come into competitions ready to compete.

"I think I’m definitely ready to compete. I think there’s still a bit more fine-tuning we can be doing.

"I haven’t really put myself under any pressure over the past few weeks to be in tip-top shape, just with the way things work around the festive season.

"I’m going into this competition with no expectation and not a hell of a lot of pressure to throw far, just put it out there and see where I’m at. Then we can work on it going forward heading into the classics and into nationals."

Peeters intends to throw at Wellington’s Capital Classic and Auckland’s Sir Graeme Douglas International meeting in the lead-in to the national championships.

Following that, she hopes to compete at both the Melbourne and Brisbane Track Classics, although that will depend on the border situation.

Peeters will compete at the night’s first event, which starts at 4.30pm.

The men’s long jump also boasts a quality field, with southern trio Shay Veitch, Felix McDonald and Quinn Hartley all among the country’s elite, while Anna Grimaldi is in the women’s competition.

On the track, Otago distance star Oli Chignell will run his first race at home since 2018.

The meeting concludes with a mixed relay at 7.15pm.