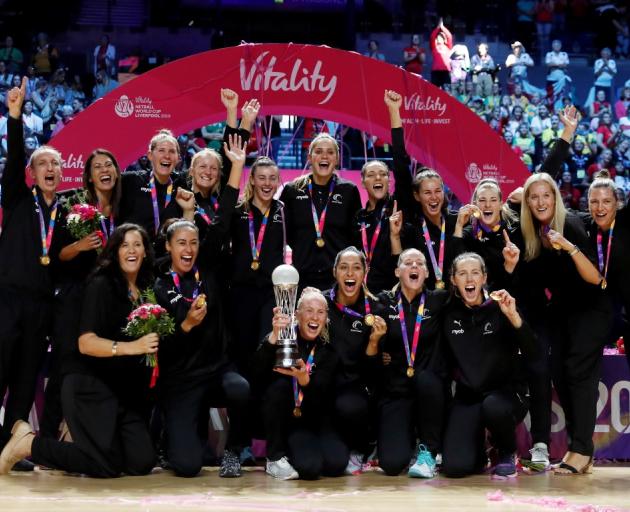 The Silver Ferns celebrate with the trophy after winning the World Cup. Photo: Reuters
The best of the past year in New Zealand sport will be recognised at the Halberg Awards tonight.  Jeff Cheshire looks at who may emerge victorious.

Sportswoman of the year

You would not begrudge Duncan this one, winning the motocross world title after three years of horrible luck. Langman and Carrington were their usual classy selves. But it is hard to go past Sadowski-Synnott, the Wanaka snowboarder claiming a world title to go with X Games gold and a US Open win.

Sportsman of the year

Adesanya should win this. The UFC middleweight world champion shot to stardom and has become one of New Zealand’s most globally recognised sporting figures.

In the eight years this award has been presented, Pascoe has won five of them. She will have a strong chance again, on the back of four gold medals at the para-swimming world championships. However, Leslie claimed two golds and a world record at the same championships, while also winning bronze with the Wheel Blacks at the Asia Oceania wheelchair rugby championships. That achievement in two sports may give him an edge.

Team of the year

Plenty of high achievers here, but it is hard to go past the Silver Ferns. They left with very few expectations after a torrid 2018 and returned home world champions. The Black Caps may feel aggrieved — they did everything but get their name on the World Cup trophy.

Coach of the year

It was the ‘Taurua-effect’’ that shaped the Silver Ferns’ turnaround and it is hard to see anyone other than her winning this category.

Four talented youngsters and it could come down to the two Otago athletes — Robinson and Fairweather. Robinson won a senior event at the FIS Alpine World Cup in the giant slalom. Fairweather claimed 200m freestyle gold at the junior world swimming championships, and performed well against the world’s best at the senior championships. A truly global sport so she may get the edge.

Take your pick. There are several deserving winners as always, although the Silver Ferns will surely be hard to surpass.