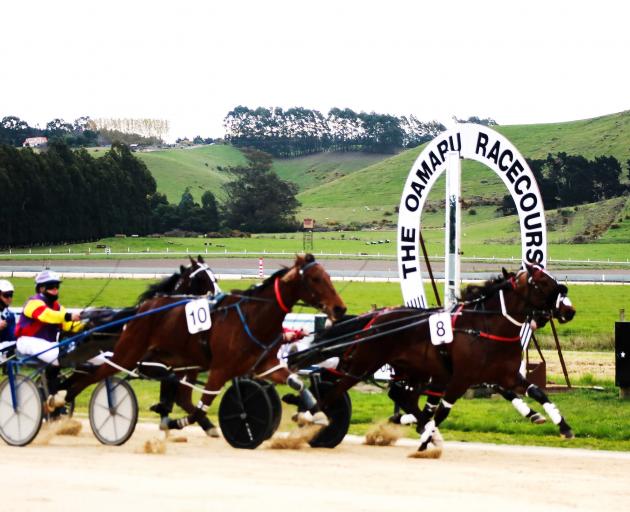 Henry Hubert (No 8), driven by Tim Williams, prevails in the feature Hannon Memorial Free-For All at the Oamaru Harness Racing Club’s meeting yesterday. Robyn’s Playboy (No 10) finished on smartly for second, with last year’s winner Classie Brigade (No 3) third. PHOTO: REBECCA RYAN
Henry Hubert left himself with an important work-on as he sprinted to a front-running victory in the Hannon Memorial Free-For-All at Oamaru yesterday.

Reinsman Tim Williams took charge of the group 3 feature by producing its only mid-race move to help the Robert and Jenna Dunn-trained 6yr-old recover from a slow start to win.

Christchurch owners Ross and Angela Gordon were taken on something of a roller-coaster ride by Henry Hubert’s early break and Williams’ key mid-race move, but their journey ended exactly where they wanted.

“He went pretty well last week and Tim said he had a handful of horse when he finished fourth in behind them. He has just got to work on those starts now.”

A lack of mid-race pressure resulted in Henry Hubert registering the slowest Hannon Memorial win since Bailey’s Dream took out the feature race on a wet Oamaru track in 2007.

Though it played into his camp’s hands yesterday with the 6yr-old unleashing a 54.5sec final 800m to win, that kind of tempo is generally not what Henry Hubert prefers.

‘‘He can follow speed good. He is better if he is out bowling along,” Gordon said.

“They ran home in 54sec today but that is really not his go, that sprint.

‘‘He likes to be up and going all of the time.”

Ross Gordon was not able to make it to Oamaru yesterday with the impacts of the country’s Covid situation keeping him busy with his business, Telfers Electrical.

But it is extremely unlikely he will miss his pacer’s third New Zealand Cup tilt following his sixth in 2019 and fourth placing in 2020.

“You never know. Racing is a funny game but all things being equal, if he is there on cup day he will acquit himself pretty well.”

Robyns Playboy charged out of the pack to run another second placing in the Hannon Memorial.

He was runner-up to Classie Brigade in the race last year.

The Ross and Chris Wilson-trained pacer got within a neck of Henry Hubert in an outstanding first effort of the season.

Classie Brigade, who was responsible for much of the race’s slow early tempo, fought on well for third in his quest for back-to-back Hannon titles.

Pembrook Playboy ran to the line hard on the back of Henry Hubert without having had clear racing room at all in the home straight.

The Nathan Williamson trained and driven 4yr-old was in a perfect spot in the trail early before being shuffled to three back on the markers when Henry Hubert took the lead with a lap to go.

The feature trot was won by the hot favourite Majestic Lavros and driver Samantha Ottley.

The Mark Jones trained 6yr-old prevailed in a tight finish over runner up B D Yasothon. 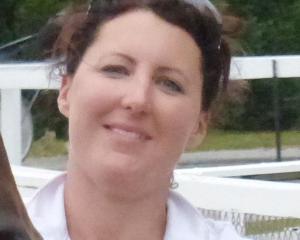 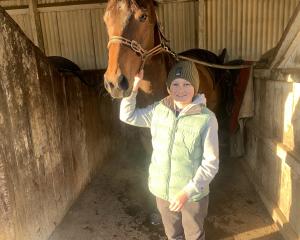 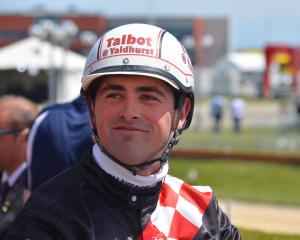