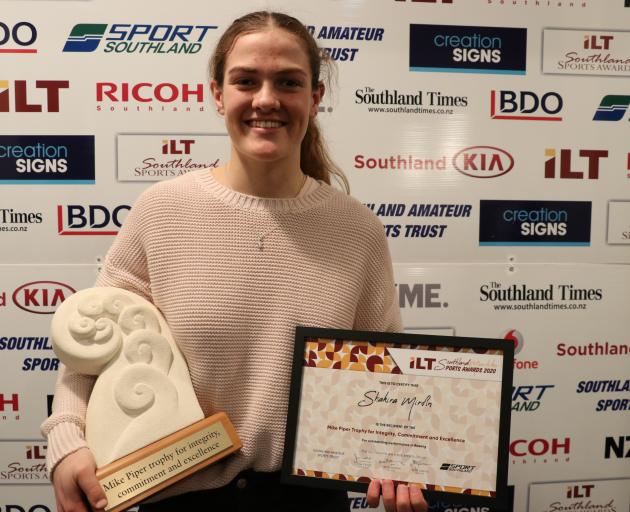 The world junior rowing champion was named junior sportsperson of the year at the penultimate night of the awards yesterday.

It followed on from her picking up the Academy Southland’s Mike Piper Trophy on Monday.

Mirfin was a member of the New Zealand quadruple sculls crew which won gold at last year’s world junior rowing championships in Tokyo.

She also won the women’s senior single sculls title at the national championships.

Southland Rowing co-ordinator David Galbraith said she had been a dominant single sculler over the past season.

"Shakira is held in high regard by all members of the Southland Rowing Association, and among her clubmates and rival clubs.

"She’s a pleasant, determined young lady who is easy to talk to."

Mirfin said the quality of coaching was a big reason for her success in the sport.

"For me, coming from the Invercargill Rowing Club, the coaching has been amazing.

"I’m very lucky to have Jack Allan as my coach; he's got an insane amount of experience."

Angee Shand has been recognised for her contributions to netball.

She won the final Sport Southland Services to Sport award of 2020.

Beginning as a player with the St Mary’s Club in 2000, Shand quickly made her mark with two player of the year titles in the space of three years.

She progressed through the grades, eventually settling in the All Stars team she now plays for and manages.

But it is off the court where Shand has made her greatest contributions.

A club captain from 2013 to 2018 and honoured with life membership in 2013, Shand’s organisational abilities were recognised in her work with Southland’s Lois Muir Team, the Southland A team, the Southern Steel and the New Zealand Men.

Shand was also a statistics caller for Sky Sport for most Southern Steel and Silver Ferns games in Invercargill.

At a governance level, Shand served on the Southland Men's and Mixed Committee, and was a key player in the successful hosting of the men’s national championships in Invercargill in 2017.

Shand serves on the Netball South board and spent several years on the New Zealand Men's board.

The awards culminate tonight with the awards for senior sportsperson of the year and story of the year.