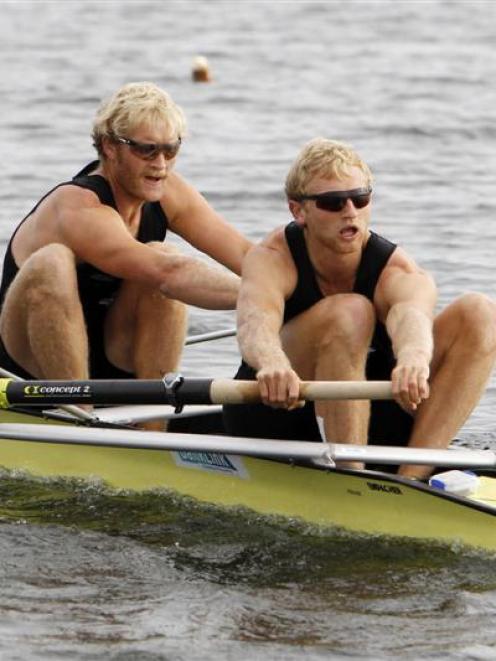 Eric Murray (left) and Hamish Bond power across Lake Karapiro in training for the World Rowing Championships in September, 2010. Photo by NZPA.
Hamish Bond is so laid-back you almost wonder if a row boat is really the best place for him. Those multiple world titles suggest he made a good decision to pick up an oar. Continuing our countdown to London, Hayden Meikle talks to Otago's greatest rower.

He feels sore. Every day, basically.

But pain is a necessary by-product of an elite rower's brutal training regime, and Hamish Bond is not the sort of man to take the easy path to glory.

All top athletes work hard but it is debatable whether anyone flogs their body quite like a rower does.

For many, it remains utterly bewildering. Why put yourself through all those early starts, those hours of agony on the ergometer, those long and lonely and mind-numbing sessions on the water?

Is an Olympic gold medal, as tantalising a prospect as it is, really enough?

Certainly, a yarn with Bond at the end of a long training camp makes the non-rower wonder what drives these long-levered boatmen to the edge of despair and back.

"The last four years has really taken its toll, mentally and physically," he told the Otago Daily Times from his base near Lake Karapiro, in Waikato.

"You get accustomed to the training but you also start to feel the niggles kicking in.

"I've had a few injuries over the last few years. Training has really worn me down at times.

"I had a shoulder injury before Beijing. And I've been dealing with a few stress fractures around the rib. Basically it's just the muscles putting pressure on.

"I also had a slight back problem at the start of the year. But I got a handle on it."

Bond and pair team-mate Eric Murray have been getting a handle on things just fine for three years now.

They are an extraordinary pair, winners of three consecutive world titles and the incumbent world rowing crew of the year.

Unbeaten since 2009, the black-singleted duo will be the hottest favourite of all the New Zealand medal contenders at the London Olympics. To pain, you can add overwhelming expectations of gold.

"I guess there is an expectation that we will do well," is Bond's typically understated take on being the undisputed No 1.

"The most expectation and pressure comes from ourselves. No-one would be more disappointed if we don't do well than us.

"We're aware of the expectation. All we can do is prepare as well as we can.

"We've been very consistent. There's not a lot of difference between a good race and a bad race for us. Nothing is ever guaranteed. But we're trying to reduce the possibility we can lose as much as possible."

One of the last minor obstacles in their path has already been cleared, as British rowers Andy Triggs-Hodge and Peter Reed have moved into a coxless four.

To most, it looks like the white flag has been raised. The Brits had suffered a run of 14 consecutive defeats to the Kiwi pair, after all.

Bond would never be so graceless to call it a surrender.

He points out it was simply a decision the British team had made in the interests of success.

"They're chasing Olympic gold medals, just like us. If they win a gold medal in the four, the British public isn't going to give two hoots about what's gone on before.

"Their coach is very pragmatic and obviously feels bolstering the four is the best way to go. They're going to be very difficult to beat. They're quite an intimidating crew."

This will be Bond's second Olympic experience, but he hopes it will lead to happier memories. In 2008, he and Murray were part of the New Zealand four that under-performed.

Bond, Murray, Carl Meyer and James Dallinger had won the world title the previous year. But in Beijing, they failed to even make the final.

Four years of hard training and competition has given the pair the confidence there will be no such disappointment in London.

"We know we've got the speed, because we've proved it time and time again. Now it's about performing on the day," Bond said.

"Having the experience of an Olympics behind me is a good thing. I'm much more aware of the whole event and how it's different to anything else."

Bond and Murray are now in Switzerland, for the first of the world cup regattas that form the shakedown to London.

They will then spend some time in Belgium and Germany.

The plan is to show "decent" form and tuck away another couple of wins.

Improvements can be made between now and the Olympic regatta, but they will be tiny.

"I suppose 97% of our training has been about getting back to our top level. Then the little extra is trying to find more speed," Bond said.

"It's tough. You spend so much time just trying to get up to a certain level.

"Then you need to dig deeper, to progress from there.

"Hopefully, we can get a little bit faster. Our training times have been good. We think we're in pretty good form."

The New Zealanders have rowed on the London course many times. It was a fairly standard course, Bond said, though it was exposed and could get choppy if the wind picked up.

After (hopefully) the absolute peak of his sporting career?

Bond is fairly certain he will stick with rowing. But he will be keen for a break, and it would be "hard to know" what his motivation would be like to immediately gear up for another Olympic campaign.

He has balanced financial studies with rowing over the years, once famously sitting an exam in a hotel conference room in Slovenia. So a career with numbers eventually appeals.

You might even see Bond move from the water to two wheels. He enjoys cycling, and has competed in the Tour of Southland.