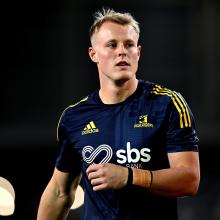 Gilbert pleaded guilty to the offence, and the Sanzaar Foul Play Review Committee last night handed down the suspension.

Gilbert was shown a red card in the 28th minute of the game against the Waratahs at Forsyth Barr Stadium on Sunday for lifting Hooper off the ground and dropping him on to the turf.

Committee chairman Michael Heron QC ruled the act of foul play merited a mid-range entry point of 10 weeks due to the degree of recklessness and the danger posed to Hooper.

Mitigating factors, including Gilbert’s previously clean judicial record and his guilty plea, cut the ban in half.

Meanwhile, another Highlander has confirmed he will also not be seen again in the blue jersey.

It rather sneaked under the radar but midfield back Patelesio Tomkinson has signed a deal with a Welsh club.

"I am looking forward to heading over to Wales later in the year to join up with the Dragons," Tomkinson told the Dragons website recently.

"Since leaving school, I have been fortunate to be involved in professional rugby and played for two New Zealand teams.

"I have made some great friends and both teams mean a lot to me, but it’s time for a new chapter and I’m excited about taking this opportunity at the Dragons."

Tomkinson, who turns 26 on Friday, was a hard-running midfielder or wing who had a propensity to get into strife due to an uncompromising tackling technique but was a reliable performer at Super Rugby and NPC level.

Tomkinson, from the Harbour club, began at Kavanagh College but finished at Otago Boys’ High School, from where he made New Zealand Schools in 2014. He was a New Zealand under-20 representative two years later.