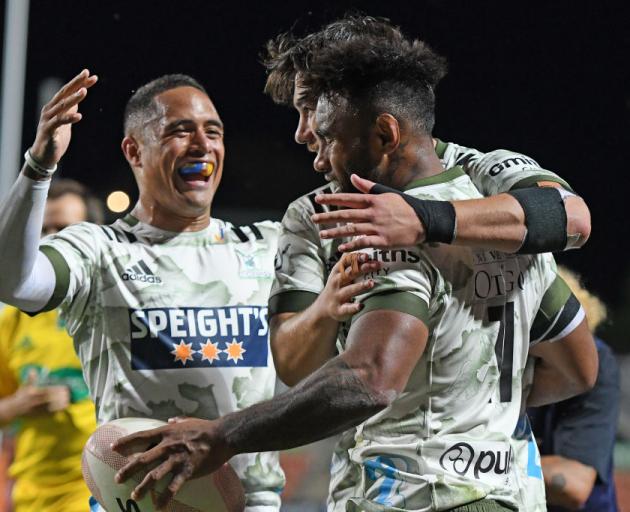 The Chiefs and their supporters may be wondering when their horror run in Super Rugby Aotearoa will ever end after they blew a healthy lead against the Highlanders at Waikato Stadium tonight to slump to their 10th consecutive loss.

There were few signs of rust in the first half despite the Chiefs having a bye last weekend in round one, but after cruising to a 20-11 lead and impressing with their skill, composure and discipline, they crashed to a familiar finish. They have yet to win a match in the competition after losing all eight of their SRA matches in 2020.

With loose forwards Sam Cane and Luke Jacobson in the ascendant and outside backs Etene Nanai-Steturo and Damian McKenzie ever-present dangers, the Chiefs were the only side in it in the first half, a dominant performance which also owed much to the Highlanders' ill-discipline.

New coach Clayton McMillan, in charge while Warren Gatland is away with the British and Irish Lions, may have felt like he was in possession of a golden touch. Instead, the game, which made history with a successful first captain's referral by Highlanders co-skipper Aaron Smith, was turned on its head, with the Highlanders winning with a bonus point.

Tony Brown's men, who lost a relatively close one against the Crusaders in Dunedin last weekend, lost midfielder Sio Tomkinson and hooker Ash Dixon to yellow cards in the first 40 and were in deep trouble at 20-6 down following tries from Jacobson and McKenzie.

The Chiefs again looked likely once Dixon left the field but instead Highlanders wing Jona Nareki was a beneficiary of a charged down Bryn Gatland kick and sprinted home from 90m to allow the visitors to grab on to the game by their fingernails.

Nareki, the jet-heeled left wing, turned out to be a significant figure in his side's remarkable comeback because, once halfback Folau Fakatava scored by the posts after halftime to spark it, the little No 11 fanned the flames by running through both Cane and Brad Weber to set up Shannon Frizell for a long-range try and then scored one himself after a poor Gatland drop in front of his posts which earned a wry look from coach McMillan.

With All Blacks halfback Smith lifting the speed and intensity significantly once replacing Fakatava, Nareki was in again in the left corner to snuff out any hopes of a Chiefs bounceback.

He was virtually unstoppable after the break, and with Frizell and his fellow Highlanders big men starting to exert their dominance, the Chiefs, perhaps feeling the pinch in terms of conditioning, were well beaten.

Nanai-Seturo was over for the Chiefs with just under four minutes remaining, but, before it could be referred by referee Paul Williams and his fellow officials, Smith's captain's challenge over potential foul play by Chiefs loose forward Mitchell Brown on first-five Josh Ioane (Brown led with an elbow), was upheld and the possible try immediately ruled out.

The Highlanders hold the record for the worst losing streak in New Zealand Super Rugby history with 11 defeats in 2012/2013 but the Chiefs are quickly closing in on that and to make matters worse must face the defending champion Crusaders in Christchurch next weekend.