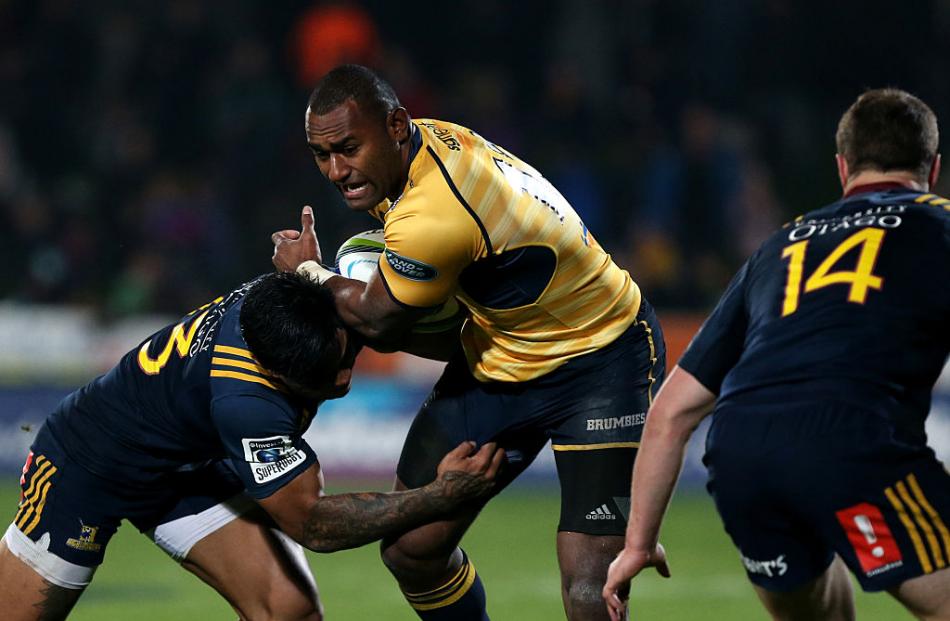 Malakai Fekitoa tackles Tevita Kuridrani for the Highlanders in their win over the Brumbies. Photo: Getty Images

Otago Daily Times Online rugby writer Jeff Cheshire looks at some key points from the Highlanders' 23-10 win over the Brumbies in Invercargill.

Not for the first time this year, it was the Highlanders defence that was the key to their win. You can break the game down all you want, but sometimes it just comes down to having the right attitude and being accurate. The Highlanders made 160 tackles and only missed 10, against a team that had 77% of the possession. All that and they let in just one try. They did not look to contest the breakdown, fanning out and trusting themselves to make their tackles. That means you are going to have to defend for long periods. But they did it well. At one stage they defended for 20 phases, keeping the Brumbies out and eventually hacking the ball back downfield. It was a pivotal moment in the game. They organised themselves well, got up fast and when they had to scramble they were outstanding.

Wet conditions were never going to make for a pretty game. They make it hard to play expansive rugby. Mistakes will be more prevalent and teams will take a more conservative approach. That was the story of the first half, as the Brumbies held the ball for long periods, although didn't try to do too much. Consequently it was easier for the Highlanders' defence to remain organised and the direct approach of the Brumbies saw a lot of repetition with forward runners. Chances became scarcer and taking the ones that arose became all the more important.

Despite having only 23% of the possession, the Highlanders scored 23 points to the Brumbies' 10. That really is a phenomenal statistic. But the Highlanders took their chances while the Brumbies didn't. The Highlanders led 7-3 at the break after tackling for most of the first half because they were able to get across the line during their period on attack. The second half saw them create something from nothing, as they are more than capable of doing, to score a second try. From there they chipped away with kicks at goal. The Brumbies meanwhile struggled to create try-scoring chances and turned down kicks at goal to kick to the corner and failed to cash in.

Where the Brumbies rolling maul was their biggest weapon against the Highlanders last year, last night it was their downfall. They took just one shot from a penalty, turning down several others to go to the corner for a lineout drive. But it didn't work. While they scored once from the tactic, too many other times they did not. At times the Highlanders did a good job of pulling the maul down. But three times they were penalised for obstruction, with Sam Carter being in front of the ball carrier when the maul was set. They were their own worst enemies. In a close game where chances are few, keeping the scoreboard ticking over is important and the Brumbies tactics, and failure to execute them, prevented them from doing so.

Building phases was the hallmark of Brumbies' teams prior to the Jake White-era. Last night that tactic was very much on show, although perhaps not quite as slick in execution. Their intent was fairly simple, play a direct game, don't go far from the support and hold onto the ball. They did it well. But they did not do much else. When they tried to go wide they threw poor passes. Their inability to create space saw them rarely in try-scoring positions, aside from rolling mauls. It is something teams have tried before the Highlanders this year and it hasn't worked. When you come up against a defence as good as the Highlanders, sometimes you have to do something a bit different to get them out of position.

While every game is an important one to win, this one was especially important. Coming off two consecutive losses and on the cusp of falling out of the playoff spots, this was a big win in more ways than one. Not only does it keep the Highlanders in touch with the competition's top teams, it will give them a huge confidence boost and stops them falling into a true form slump. They will look to ride the wave from this win through to their showdown with the table-topping Chiefs in Hamilton next week. At the same time it sees the nearest competitor for the top five spots in the Australasian Group, the Brumbies, stay stagnant.