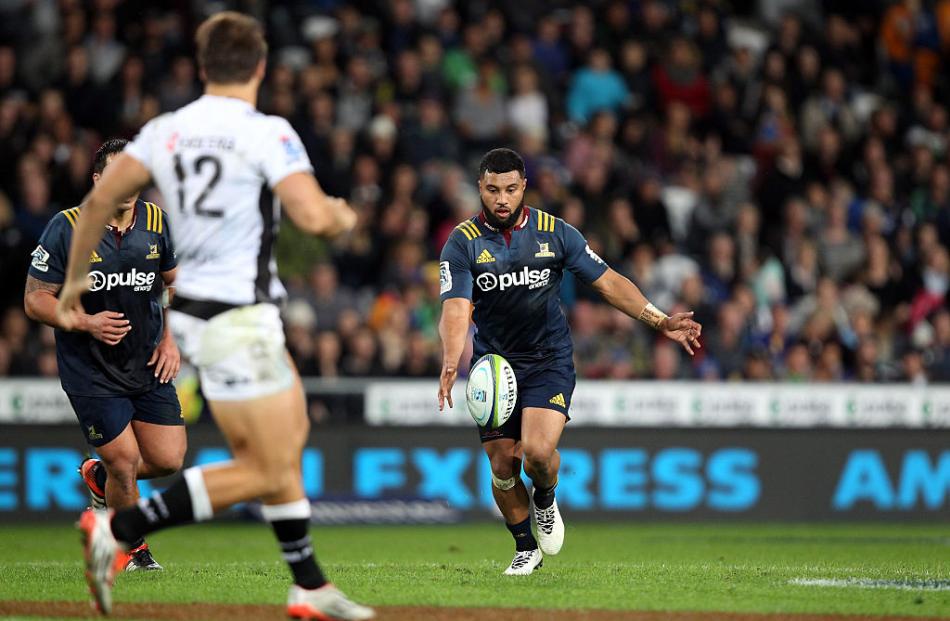 Lima Sopoaga looks to kick during the Highlanders' loss to the Sharks. Photo: Getty Images

Otago Daily Times Online rugby writer Jeff Cheshire looks at some key points from the Highlanders' 15-14 loss to the Sharks.

Any time there is a red card in a match it is going to be a decisive moment. When it comes in the twelfth minute, winning is going to be a tough task. Was the card itself justified? Jason Emery began his chase from a long way back and was coming very quickly. It looked like he did pull out of the contest, but did so too late and could not stop himself. The result was a clumsy contact in the air, with a bad result. Coming to a stop would not have been as easy as it looked. When things happen that fast you have to make decisions quickly, sometimes in less than a second. That is not easy and hard to appreciate from the stands or on the television. Had Willie Le Roux not landed on his head, would Emery have been red carded? It should not have made a difference, as Emery's actions would still have been the same. In saying that, it was not a good look and everyone has responsibility to look after the man in the air.

Once Emery left, there was a clear lift in intensity from the team, with some players in particular stepping up. Ben Smith was outstanding, hitting the ball hard and looking to stamp his presence on the game. It was always going to be tough though, as losing a player makes it hard to stick to your patterns. The Highlanders often use their second five-eighth as a "glue player", someone they want to do basic things well so others are freed up to be more adventurous. Without that man, the Highlanders were forced to change things up, getting other people to fill that role in amongst doing their regular one. That limited what they could do on attack, although they still created enough to score more than one try. Defensively they held the Sharks tryless, although the Sharks rarely threatened.

The Sharks defended well and were prepared to give away a lot of penalties to do so. They attacked the breakdown aggressively, but not always legally. They came up fast, but often got offside. That prevented the Highlanders getting clean ball and limited the space they had to attack in. It cost the Sharks a lot of penalties and two men to the sin bin, but given they got the result, you have to say it worked. The stop-start nature allowed the Sharks to reset on defence, while Tendai Mtawarira's constant conversations with referee Ben O'Keefe slowed the game down, allowing the Sharks' big forward pack to recover. That enabled them to play their game and took the Highlanders out of theirs.

If Emery's red card was the key moment in the game, the way the Highlanders closed each half were the key periods. The end of the first half saw them pile on the pressure, holding the ball inside the Sharks 22 and hammering away at the line. Indeed they went very close to scoring twice. But the Sharks held them out, giving away a bunch of penalties and losing a man to the sin bin in the process. Prior to that the Highlanders had turned down a shot at goal, which could have been crucial in the end. Likewise the end of the second half saw the Highlanders rally after giving up the lead with six minutes remaining. They were unable to find a way to win though, with a drop goal narrowly missing and mistakes proving costly.

Bad one to lose

Home games are important to win in this competition, especially against overseas teams. The Sharks look to be no more than a middle of the road team this year, while the Highlanders were in a position of needing a win to get their season back on track. That made it a key game that the Highlanders really needed to win and means there is less room for error when they take on the New Zealand teams later in the season.