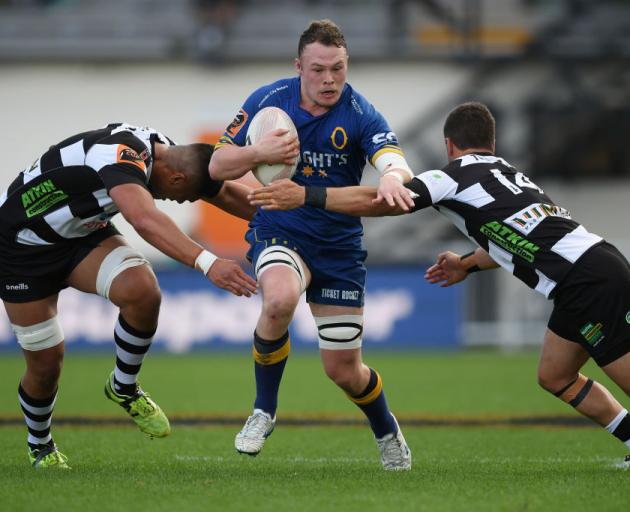 Otago flanker Slade McDowall tries to get between loose forward Marino Mikaele-Tu'u (left) and winger Caleb Makene in the semifinal against Hawke's Bay in Napier on Saturday. Photo: Getty Images
One of Otago's best players appears to be on the outer for Super Rugby selection.

It is beleived flanker Slade McDowall has not been picked by any of the five NZ Super Rugby franchises for next season.

McDowall (21) has just finished an outstanding provincial season for Otago, having played a key part in the side's road to the championship's semifinals.

A former national schools representative, McDowall has impressed this year with his openside flanker play around the field and had a top game in the narrow loss to Hawke's Bay in the semifinal in Napier on Saturday.

Departing Otago coach Ben Herring said it was hard to believe McDowall had not gained a Super Rugby contract.

He had played some outstanding rugby during the season, Herring said, and possessed a smart rugby brain.

There had been suggestions McDowall was too short to make an impact in Super Rugby but that does not hold him back when playing for Otago.

McDowall was a training squad member with the Highlanders last season but not officially part of the 2019 squad.

The Highlanders have James Lentjes and Dillon Hunt coming back in the openside flanker position for next year, while other Super Rugby teams have plenty of options in the loose forwards.

As for loose forward Adam Thomson, who knows? He could not be contacted yesterday. The predictable rumour emerged during the season that he was headed to the Highlanders in 2020 but that seems a stretch.

Thomson turns 38 next March but may have left the door open to keep playing.