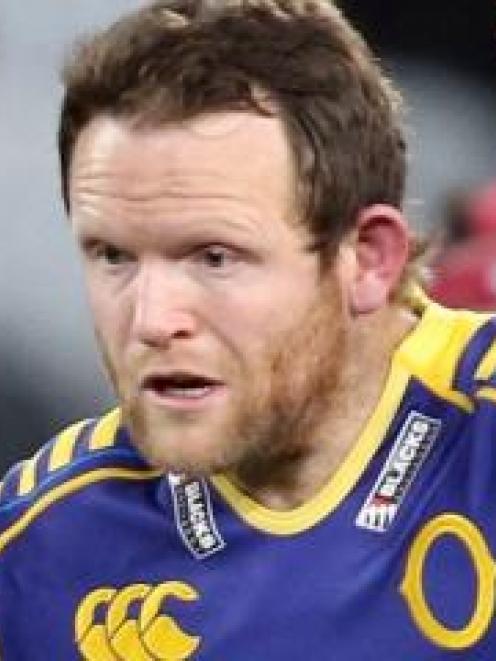 Peter Breen showed great skill in controlling the ball with his left foot on the fly to score his try.
ODT Online rugby correspondent Jeff Cheshire rates the Otago players after their 39-32 win over North Harbour.

Michael Collins 6.5/10: Pretty tidy at the back, he took the kicks that came to him and had a couple of nice kicks himself. Ran the ball back hard and put the grubber in for Breen to score. Was beaten by Tuitavake on the outside, although you know pace could be an issue when you pick Collins at fullback.

Sio Tomkinson 6/10: Bit of a mixed bag. Made some tackles, offloaded well and made a great read and break off a short kickoff. However, he also missed two tackles from going too high, one of which led to Pita Ahki's try.

Matt Faddes 7.5/10: Dangerous on attack once again, although he was possibly guilty of holding on to the ball a bit long at times. Strong on defence too, making a couple of good cover tackles.

Tei Walden 5.5/10: Tidy and no more. Had one good carry, but otherwise a quiet night.

Jack Wilson 6.5/10: Chased well on the kicks, which resulted in an intercept try. Had a couple of good runs with ball in hand, although he missed a few tackles, one of which nearly resulted in a try but for a brilliant Faddes cover tackle.

Peter Breen 7/10: Ran the backline well, took his high balls (mostly), put up some good bombs which North Harbour struggled with and showed great skill in controlling the ball with his left foot on the fly to score his try.

Josh Renton 7/10: Passed well, made a good snipe and put in some very good kicks which required vision and accuracy. Has gotten better and better over the past month.

Mika Mafi 7/10: Was a handful with ball in hand while he was on. Left the field after 27 minutes and didn't look to be in great shape.

James Lentjes 6/10: Not overly prominent. Made a few tackles and scored a try with a pick and go after spotting a hole to the left of the ruck.

Jackson Hemopo 7.5/10: Carried the ball very well. Broke the line to make 20 metres or so in the first half and was too strong for the defence in scoring a try in the second. Got to quite a few rucks and was physical going into contact.

Tom Franklin 7.5/10: Had a bad missed tackle on Tuitavake's try, but otherwise was outstanding. Exceptional in the air, both in the lineout and off the kickoff. Utilised his quick hands to put players into space and got through enough work around the park.

Josh Dickson 6/10: Got involved although he did not make a huge impact. Another who was guilty of going too high in the tackle, but competed well in the lineouts, stealing the one which led to Hemopo's try.

Hisa Sasagi 6.5/10: Worked hard, particularly in support, and made one good run after claiming a messy lineout, which put Otago in position to score a try.

Liam Coltman 7/10: Another who was heavily involved, getting around the field at pace to support at the breakdown and was strong with ball in hand. Threw well into the lineout too.

Craig Millar 7/10: Got around the field well, supported play, was the equal leading tackler and went looking to get his hands on the ball.

Sekonaia Pole (No Rating): Played the last 11 minutes and got pretty involved, made a few tackles and looked lively.

Aki Seiuli 6.5/10: Made his desired impact, adding some spark. Reclaimed a kick after a good chase and had one good run close to the line.

Donald Brighouse (No Rating): Came on at the same time as Pole. Not hugely noticeable, although he was involved in a big scrum close to the line which was - perhaps harshly - penalised.

Charlie O'Connell 6.5/10: Got his hands on the ball a few times, had a good offload, made a few tackles and generally got around the field well.

Naulia Dawai 7/10: Hit the line hard when running the ball, made a few tackles, but had his biggest impact was the pressure he applied with his chase at the kickoff.

Kaide Whiting (No Rating): Did not get much to do as Otago were mainly defending while he was on.

Fletcher Smith 6.5/10: Threw one bad pass under pressure, but looked good when he took the ball to the line. Showed great awareness to kick long and chase off the penalty prior to Wilson's try.

Jayden Spence 5.5/10: Did not get much of a chance on attack, but got involved on defence and was part of a good counter ruck while Otago was under pressure.