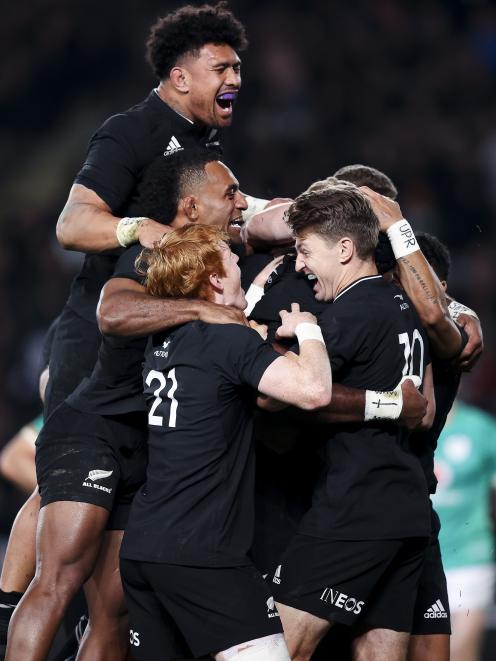 The 103-test veteran was back to his cheeky, silky best on Saturday night as he helped inspire the All Blacks to a crushing 42-19 win in the opening test against Ireland at Eden Park.

Smith had not played since the Highlanders’ penultimate game, against the Rebels in Melbourne, after which he had a break to sort a niggling groin injury.

He had had a merely solid Super Rugby campaign, by his own exceptionally high standards, in a mediocre Highlanders team, but being back in black clearly felt comfortable as he ran the show for 60 minutes and provided a highlight reel moment when he sniped, chipped ahead and batted the ball back for an Ardie Savea try.

"I was a bit rusty at the start," Smith said after returning to Dunedin yesterday before the second test at Forsyth Barr Stadium.

"Those first 15 minutes, there were a few wild passes and average kicks and a couple of mistakes.

"But I felt like I was able to build into the game, and we were really happy with where we went with our attack, finishing off some opportunities.

"It was a really big occasion and it was tough and very fast. The lungs are feeling it."

The All Blacks exploded for four tries in a 17-minute spell in the first half that shocked the Irish.

Smith said that was one of the positives the All Blacks could take from the performance.

"All the pressure and the intent and the stuff we’ve been talking about trying to fix — we put parts of that on the field last night.

"We’ve got a lot to improve on but it was good to get a grasp of test rugby again and be able to respond at certain times.

"We were under pressure at times and our defence really stood up. But you let good teams like Ireland into your 22m too many times and they are going to score points, so we’ve got to fix that up.

"Ireland went very hard at the breakdown. When we were late on our cleans, or weren’t getting our ball placement right, Ireland were able to disrupt a lot of our ball.

"So that will be front of mind for us. When we get things right, our attack can look pretty good."

He built his early reputation as a terrier, and Smith’s instinct for an attacking opportunity was to the fore again when he set up Savea’s try with a desperate lunge at the ball as it nearly bounced out of reach.

The irony was he was actually hoping to scrape the ball back for himself to score but he took consolation in the fact it popped across for his loose forward team-mate.

Never one to miss an opportunity to highlight the appeal of his adopted city, Smith said he was not at all surprised the All Blacks were greeted by a glorious Dunedin day yesterday, and he was relishing a chance to play another test at the covered stadium.

Whether he will have all of his team-mates alongside him is uncertain.

The All Blacks were still waiting yesterday to hear if forward Scott Barrett was to be cited for a clean-out on opposite number Peter O’Mahony, and coach Ian Foster was in no mood to discuss the issue when he arrived in Dunedin.

Foster was more forthcoming about the chances of lock Brodie Retallick, who appeared to suffer an eye injury on Saturday night, fronting in Dunedin.

"I think he might have got a Sam Whitelock hand in his face," Foster said.

"It was pretty sore, but he should settle down in a couple of days."

Foster said general soreness was the prognosis for many of the players after a physical battle with the Irish.

"For a lot of the players, it was their first game for a few weeks, and a lot of them are still recovering from getting their energy levels back after Super Rugby.

"So it was a pretty subdued changing shed in many ways."