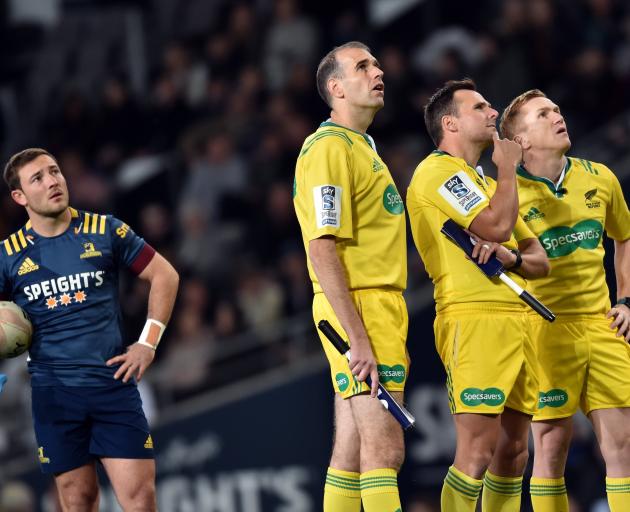 Queue here, queue there. Traffic lights, supermarket counters, the line at the exit door at the National Party caucus room.

But more and more, waiting and waiting is happening on the sporting field.

And it is only getting worse thanks to decisions to get things right. Sport in general has slowed over the years. Not slower in the way the game is played — in that regard, it is probably faster than ever.

No, it has slowed in the way games now have much more standing around and waiting.

A study last year by Australian rugby statistician Ian Smith showed there had been a massive increase in time-off periods when players stand around and get ready to play.

A study he did from the first World Cup in 1987 to the latest one in Japan showed the ball is in play longer than it used to be. That is clear. But there is much more standing around and waiting. At the 1991 World Cup there was just under three minutes of time-off periods in each game. At the 2019 event it was more than 14 minutes. So the ball may be in play but it ain’t doing anything.

The number of scrums has gone from 30 in 1987 to under 12 last year. But, strangely, the total stoppage time for scrums has remained the same.

Every scrum now takes about two minutes as players take too long to get ready.

There is much more waiting around. Now the need to get every decision right is making the waiting even longer. It is more drawn out — and as boring — than an Apple product launch.

Technology was brought in to get right tight decisions which could have gone either way.

But it was supposed to be only for absolute howlers — not for every movement on the field. Sport — despite what some people think — is not science.

Last Saturday night at Forsyth Barr Stadium, the officials stopped play for some knock-ons, a possible forward pass, an obstruction on a defender.

Sure, everyone wants it to be right but by stopping the match and showing all these different angles — and, by the way, why do they always give the worst possible angle straight away which helps no-one? — it just totally slows the game down.

And the most perplexing of the whole thing is all it does is shift the decision making. The guy with all the cameras consults with the guys on the field and offers some advice. In the end, someone has to make a decision — right or wrong.

Some of the television coverage helps make a decision. Lots of it doesn’t. Most sport lives in the grey area, which is open to interpretation no matter how many views a replay gets.

All it does is make games even more drawn out — 80-minute games now take near on two hours.

Cricket is now dominated by the television decision review system while league, baseball, basketball and now football have all gone down that rabbit hole.

We all want to get things right but to get it right is getting other things badly wrong.