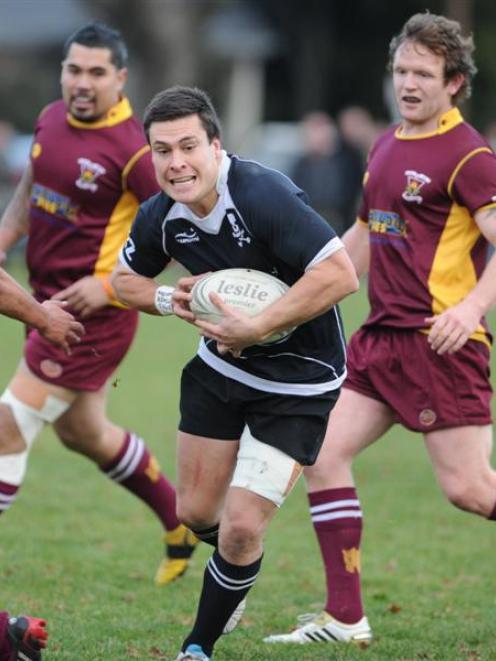 Pirates replacement Paul Tupai seeks to make a break during the game at the North Ground on Saturday. Behind are Alhambra-Union backs Johnny Liaina (left) and Peter Breen. Photo by Craig Baxter.
The top four appear set. It would take a big reversal in form for Taieri, Dunedin, Southern and Alhambra-Union to be pushed out of a semifinal spot.

The chasers are Kaikorai and University A, but they will need to keep winning with bonus points to challenge the leaders.

Pacy winger Glen Beadle scored two tries to help Taieri beat Harbour 29-10 to stay at the top of the competition.

Midfield back Luke Herden used his strength to score a try in his 200th premier match for Southern and played a key role in the 28-7 win over Kaikorai.

Dunedin fullback Liam Edwards kicked five goals and scored 18 of his team's points to become the first player to reach 150 points this season.

He leads the individual scoring with 167 points and is followed by Stephen Fenemor (University A) 133, Peter Breen (Alhambra-Union) 119, Cam Rutherford (Kaikorai) 118 and Ben Patston (Southern) 110.

The powerful Dunedin pack used blitzkrieg tactics to shut Green Island out of the game at Kettle Park.

They kept attacking round the fringes with wave after wave of attacks that tested the Green Island defence.

It was spearheaded by loose forwards Gareth Evans and Mitchell Zandstra with their driving runs at the defensive line. They were backed by the front row of David Smart, Daniel Cairns and Jacob Ellison who made ground with the pick and go.

The strong Dunedin front row exerted pressure and kept Green Island moving backwards in the scrum. Lock Richard Thompson was dominant and made six clean takes in the lineout.

He grabbed the ball in the lineout for the second Dunedin try. Evans burst through the centre and put winger Pera Gibbs in at the corner.

In the few times Green Island players had the ball, they were met by a solid Dunedin defensive line with the forwards making powerful hits.

Green Island pushed Dunedin into action by taking a 10-point lead after 10 minutes. The first try came after three minutes when Buxton Popoali'i mesmerised the Dunedin defence with tricky footwork and scored under the posts.

The Dunedin reply was emphatic, as it shut Green Island out of the game and scored 33 unanswered points.

Halfback Fraser Lau had a tidy game but the best of the Dunedin backs were powerful centre Tumua Ioane, who broke through the Green Island defensive screen on several occasions and hard running fullback Liam Edwards.

Edwards injected pace into the line and scored the bonus fourth try. But he wasted two other scoring chances when he failed to ground the ball over the line.

The gallant Green Island defence restricted Dunedin to four tries but it was a battered and bruised team at the end of the game.

The best Green Island forwards were loosies Junior Sala and Taia Moli while halfback Dean Moeahu was solid and Popoali'i showed touches of magic in the backs.

Taieri went from the sublime to the ridiculous when it scored four tries to beat Harbour at Peter Johnstone Park.

The Eels had the magic touch in the first spell when they scored three tries to lead 24-3 at the break.

The Taieri backline was full of sparkle in the first 40 minutes as they launched attacks from all parts of the paddock.

The best long-range try was started by centre Michael Collins who broke the line and unloaded to speedster Glen Beadle who scored the first of his two tries.

The initiative was with Taieri in the first spell. It dominated in the forwards with lock Matt Davidson winning the lineout battle and loose forwards Charlie O'Connell and Nathan Young having strong games. Aki Seiuli was powerful in the front row.

But the game changed when Pete Mirrielees, who has just returned from playing rugby overseas, came on in the Harbour front row.

He was backed by flanker Angus Duckett as Harbour came back into the game. Midfield back Lex Kaleca made strong runs with the ball in hand.

The second half was full of niggle as the standard of play deteriorated. The game was full of mistakes from both sides and the scrums became messy.

Referee James Doleman became frustrated and sent two players from each side to the sin bin in the second spell.

Taieri scored the extra try it needed in the second half to get the bonus point.

Zingari scored two tries to one but Mark Hunter's solitary conversion was not enough to beat University A.

He missed three penalty goals in the first half when Zingari was exerting pressure on the students.

University A first five Stephen Fenemor, by contrast, was on target and kicked a conversion and three penalty goals and played a major role in the win.

The University try, after 30 minutes in the first spell, came when Zingari second five Ben Kent was resting in the sin bin.

It was a brilliant individual effort by fullback Matt Faddes who counterattacked from 40m out. He put in a chip kick, gathered it and sped over for the try.

The students led 13-7 at the break but Zingari closed the gap to one point when flanker Chris Bell crashed over for the try after 20 minutes.

At this stage, the Zingari forwards were dominating the game with No 8 Andrew Melville using his strength to crash through the advantage line. He kept breaking tackles and made life difficult for the students.

He was backed up by Bell and by the lineout work of lock Tom Rowe.

The University loose trio of Paul Grant, Dale Jarden and Jack Wolfreys kept working efficiently as a unit and halfback Nick Annear had a solid game.

Southern fullback Joe Hill intercepted a pass 6m out from his own line on the stroke of fulltime to break a second-half deadlock and deny Kaikorai a possible bonus point at Bathgate Park.

Kaikorai began well, opening the scoring through a try to prop Blair Laughton and dominated the first quarter.

But errors and missed tackles began to take a toll as three Ben Patston penalty goals and tries to winger Hamish Buick and centre Luke Herden had Southern going to the break with a commanding 21-7 lead.

Herden's try, just before the break, followed some good tactical kicking from Patston, who mastered keeping the ball in front of his forwards and turning Kaikorai's attacks into defence. One left-foot chip set Herden up to score in his 200th premier game.

Any threat of Southern cutting loose in the second half failed to materialise. Kaikorai dominated territory, but a combination of mistakes, missed opportunities and a rock-solid Southern defence had the second half drifting into a dour scoreless affair.

Only Hill's intercept on the stroke of fulltime gave any life to the second spell, where both sides contributed some outstanding defensive work, as the match evolved into a battle of the two forward packs, with neither gaining any ascendancy.

Alhambra-Union had to dig deep to beat Pirates and remain in the top four in an entertaining game at the North Ground.

Victory was not assured until inside the last 10 minutes when fullback Corey McFadzean scored close to the posts after he was put into a gap by Peter Breen.

Each side scored three tries and Breen's goal-kicking was crucial in the final analysis. He kicked six from eight to contribute 15 points while the Pirates kickers managed only three out of seven.

Pirates began strongly with two fine backline tries in the first quarter and led by four points at halftime. But Alhambra-Union regrouped in the second spell when it gradually gained some ascendancy and outscored Pirates 17-5.

Lock Jeremy McKee was outstanding in the Alhambra-Union pack, Regan Turoa was a commanding figure at the back of the scrum and tidied up a lot of loose ball while blindside flanker and captain Matt Kissick was invaluable in the tight-loose.

Mike Moeahu and Breen controlled play well in the inside backs and midfielders Colin Davies and Matt Dalley were always a threat.

Pirates was extremely competitive for most of the game and was unfortunate to not gain at least a bonus point. The pack was well led by Paul Miller in his 100th game, Josh Clark was prominent in the lineouts and tight-loose and Pirates packed the stronger scrum.

Marshall Suckling was always a threat at centre and Kieran Fowler contributed some lively counter-attacking from fullback.

Craig Sneddon was tidy at first five-eighth and several times broke the line as well as finishing off a try started by Ben Hanley.