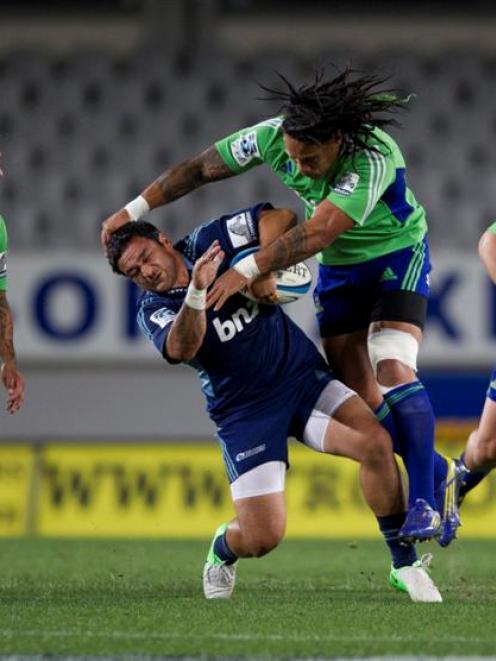 Blues halfback Piri Weepu is hit in an illegal tackle by Highlanders second five-eighth Ma'a Nonu during the Super 15 match at Eden Park, Auckland, last night. Nonu was sin-binned for his efforts. Players in support are (from left) Luke Braid, Aaron Smith and John Hardie. Photo by The New Zealand Herald.
The pain, nightmare, depression - call it whatever - continues for the Highlanders, as the side slipped to its sixth straight defeat in Auckland last night.

The Blues beat the cellar-dwelling Highlanders 29-18 in Auckland last night after the visiting side led 13-12 at the break, and heaped more misery on the southern franchise.

The Highlanders must wonder where the first win is coming from.

They were not helped by four players leaving the field with serious injuries and replacement No 8 Elliot Dixon played on the wing for the final 20 minutes.

The Highlanders ball handling was again average. It did not convert enough chances against a Blues side which has similar disregard for the ball.

The game was close throughout. The Highlanders forward pack had the ascendancy in the set piece the longer the game went on, but could not turn that superiority into points.

There were too many dropped balls, bad passes and a lack of urgency at times, and it was a game lost by the Highlanders, rather than won by the Blues.

Second five-eighth Ma'a Nonu had a game to forget, being yellow-carded for a messy tackle in the first half and then dropping the ball within sight of the line, early in the second half. He also gave away a key penalty in that second period to relieve the pressure on the home team.

Piri Weepu scored a try midway through the second half to put the home side ahead, and Phil Burleigh came back to reply after a nice break by replacement halfback Fumiaki Tanaka.

The game could have gone either way then, but the Blues came home the better.

When Weepu went over for his second try with under 10 minutes left, the writing was on the wall for the Highlanders.

They had lost Buxton Popoali'i early in the second half, felled by a high tackle by Blues winger George Moala, who was yellow-carded for his ugly effort.

Popoali'i was on the ground for more than five minutes, with real concern over his neck.

He eventually left the field on a stretcher, and was replaced by Lima Sopoaga, who left the field himself within 15 minutes, after a blow to the leg.

That led to a rearrangement of the Highlanders backline.

The Highlanders camped in the Blues territory when the home side was down to 14 men but came away with nothing - and that sums up their season so far.

The match at times resembled two teams in the bottom reaches of the table, but it was not helped by referee Steve Walsh's loose interpretation of the offside line.

Best for the Highlanders was again fullback Ben Smith and flanker John Hardie had his best game of the season, while lock Josh Bekhuis gave his all.

The Highlanders made a great start and had 10 points on the board before the Blues had barely had a sniff of the ball.

Colin Slade opened the scoring with a penalty after just a minute.

Popoali'i burst through a gap after eight minutes and when he was held up 5m from the line, Smith picked up the ball and wriggled his way past two tacklers to score.

Slade added the extras and the Highlanders had made a fantastic beginning to the match.

The Blues finally found some territory after the quarter-hour mark but Chris Noakes was astray with the penalty attempt.

Th Blues got on the board shortly after Nonu was yellow-carded following a shoulder charge on old mate Weepu.

The Highlanders defence was stretched and the Blues found blindside flanker Steven Luatua out wide and he crossed in the corner untouched.

The visiting side was finding it tough a man down and a period of sustained pressure from the Blues was rewarded with big prop Angus Ta'avao barging over by the posts to score.

Noakes added the extras and when Nonu came back on the field, he found his side behind.

The Highlanders were getting sloppy near the end of the first half but Slade slotted a penalty to give his side a one point lead at the halftime break.