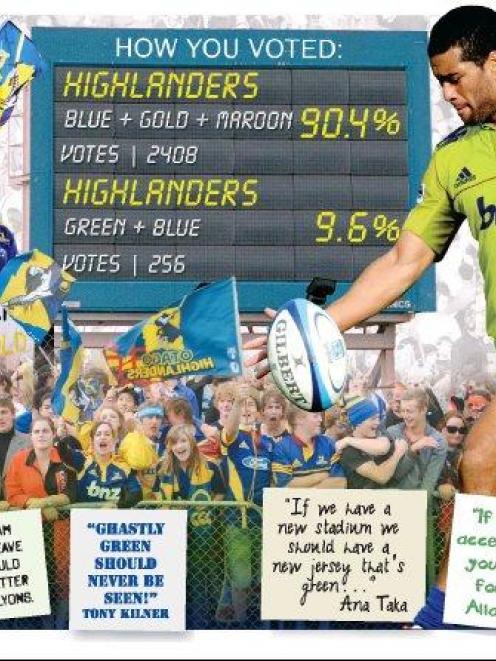 Highlanders captain Jamie Mackintosh has labelled his team's new green strip "snazzy" and the way professional sport is evolving, but the franchise's fan base is emphatic blue, gold and maroon should remain.

A total of 2664 people contacted the Otago Daily Times yesterday to indicate whether they supported the Highlanders franchise's decision to change the jersey colour to green.

"The reason so many are taking such a strong view against the new shirt isn't really anything to do with the colour. It's to do with the fact that we have been told all year that this is our team, to get behind the boys, believe", Matt Menzies wrote.

"But when it comes time to change something about 'OUR' team, we don't even get an opportunity to put forward our opinions." However, Allan Grant believed the existing Highlanders jersey was too similar to the Otago team strip.

"If you don't accept change, you don't go forward," he said.

Jamie Mackintosh, who will lead the Highlanders out in their final game at Carisbrook on Friday night, said the new jersey was not a distraction.

"It is something different. We just got presented with it early this week. One of the boys modelled it early on. Don't know where all that green stuff comes from. That's if it is green, that is."

The Highlanders are debuting a new playing strip this Friday night, but are keeping it under wraps until then.

Mackintosh said he could see both sides of the argument, but only had to look across the training field to see how the rugby landscape was changing.

"But the thing is, rugby is evolving into a professional sport.

He could understand why people were still attached to the provincial colours but it was about moving to a new strip and a new venue.

"To me, it is all about winning this weekend, and not the colour of the jersey.

"It is not a distraction, When you've got Jamie Joseph as your coach, not much is a distraction. You are focused on your footy, and that's a great way to be."