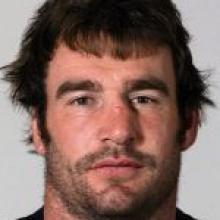 Andrew Hore
Finance appears to be the biggest obstacle in getting the likes of Andrew Hore at the Highlanders next season.

All Black hooker Hore has been told he is not wanted by the Hurricanes next season and has made it clear he would like to come home and play for Highlanders. He is expected to talk to Highlanders officials next week.

He has a farm in the Patearoa area and was rumoured as early as last year to be considering a shift south.

Highlanders general manager Roger Clark said although there were indications that Hore wanted to come south, nothing had been agreed.

"Anything is a possibility at this stage but we have not entered any formal negotiations with players," he said.

With Hore keen to come and the Highlanders needing a back-up hooker, it would seem an easy decision to sign the hooker.

But budgets also had to be considered, Clark said.

"From a business perspective, budgets have to be met and so we haven't got the ability to sign every player. Budgets are going to be tight for all of the franchises . . . the way the franchise contracting model is set up then you can't stack a team of All Blacks."

Hore was due to come south over the weekend, turning out for Maniototo in club rugby, and may meet Highlanders officials as soon as early next week.

The Highlanders have already signed 22 players from this year's squad for next season, with just the one hooker, veteran Southland rake Jason Rutledge.

They are also hoping to sign skipper Jamie Mackintosh and centre Kendrick Lynn, with whom negotiations are continuing.

Also clouding the signings of additional players is the decision to reduce the player payments by $125,000 for each of the five New Zealand franchises.

Under the payment scheme agreed by the New Zealand Rugby Union and the Rugby Players Association, payments for players are set at a percentage of income generated by the whole game.

But because that has been reduced as income has dropped, each franchise has been told by the New Zealand Rugby Union it will have less income next year to spend on players.

Clark said all five franchises had agreed to cut squads from 32 players to 30 and that would mean one less halfback and one less hooker.

The Highlanders have not used third-string halfback Sean Romans at all and young hooker Brayden Mitchell has not started a game.

Signing the likes of Hosea Gear and Nonu also had to be considered part of the budget but their signings would be a coup for the franchise."It's no secret that our coaches have been saying that one wish they do have for next year is to get some players with the X-factor and those guys are those sort of players."

Clark said there was in effect no rush to sign players as they had until November before the squad was named.

• The Waratahs will not name their team to play the Highlanders until today.

Coach Chris Hickey is waiting to see how injured players such as skipper Phil Waugh and No 8 Wycliff Palu come through training before he finalises his side.