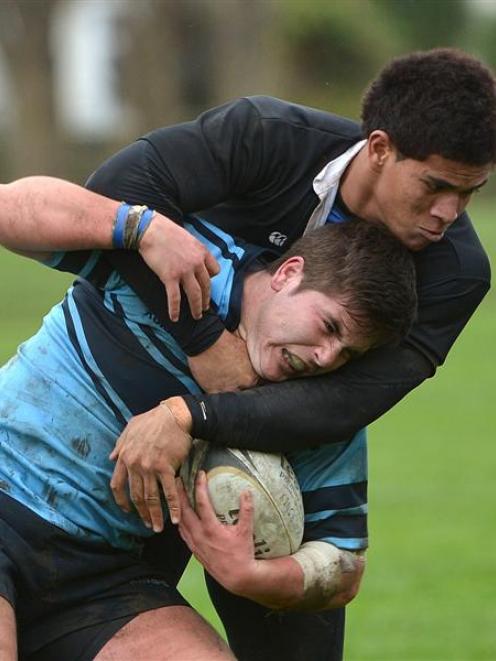 The trio were strong in the scrum and the drive and kept the pressure on the Waitaki defence.

The King's pack had a clear edge and flanker Logan Garforth and replacement No 8 Rewi Pomare also had strong games.

Inside backs Joel Meade and Taylor Haugh were efficient, and fullback Luke Maker added flair when he joined the line.

The most impressive players for Waitaki were midfielders Willie Saulala and Loni Fisiihoi, who were always dangerous with the ball in hand and scored three of the team's four tries.

Flanker Josh Miller was a tenacious tackler and skilled at the breakdown, and lock Jesse Lusty Winter won his share of lineout ball.

Waitaki led 15-12 at halftime and kept its nose in front when first five-eighth Matt Munro kicked his second penalty goal midway through the second half.

But Waitaki made the mistake of attempting to run the ball out from its own 22m in the heavy conditions and dropped the ball.

This allowed King's to camp for a long period inside the Waitaki Boys' 22m, and two converted tries gave King's a 31-18 lead.

An intercept by Saulala at halfway led to the first of two quick tries that brought Waitaki back into the game, before King's sealed the game through strong pressure from the forwards that led to the sixth try.