Rugby: Otago go down in semifinal 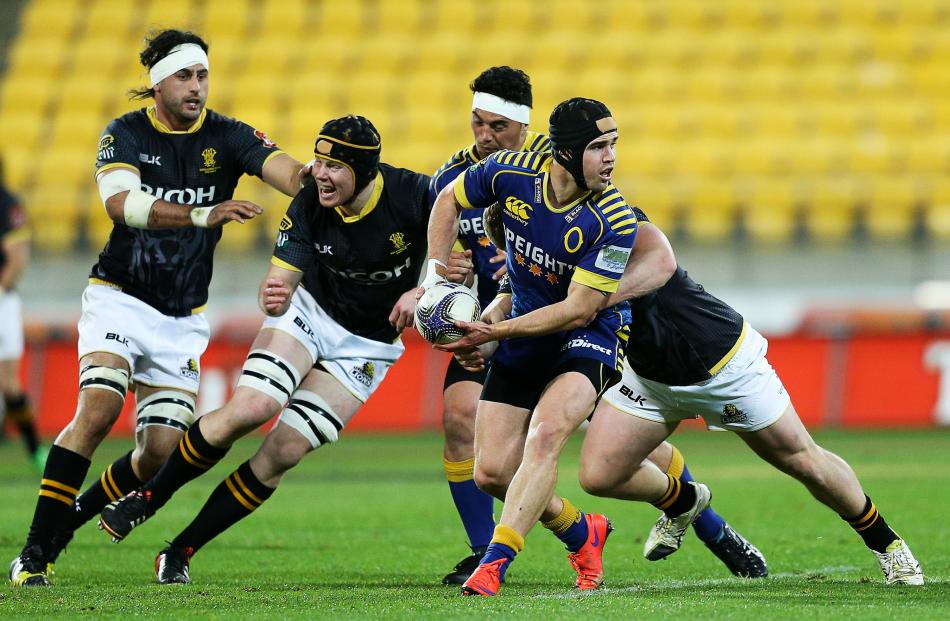 Fletcher Smith of Otago looks to offload during the ITM Cup semifinal between Wellington and Otago at Westpac Stadium in Wellington. Photo by Getty

The defensive bedrock on which Wellington have built their promotion bid tonight carried the Lions to within one win of their ultimate goal.

Boasting the best defence in the Championship, Wellington easily snuffed out the top attack in Otago to book a final date with Hawke's Bay on Friday night in Napier with a 34-14 win.

Wellington were last year relegated when a woeful defensive effort produced one win from 10 games, but Chris Boyd's side are now on the verge of bouncing back to the Premiership after a season in which they conceded fewer than half the points (178) they did in 2014 (381).

Otago were held largely shut out at Westpac Stadium, frustrated by a defence that was proactive instead of reactive. Wellington were busy at the breakdown and disruptive at the set piece, effectively limiting their opponents' attempts to establish any continuity.

The home side were able to atone for their one defensive miscue this season - when two tries in the final three minutes saw Otago walk away from the same venue with a one-point win - and will next week set out to make amends for another late lapse.

Hawke's Bay were a sideline conversion away from stunning Wellington when the two teams met last month, settling instead for a dramatic draw when Ihaia West's attempt drifted wide. The rematch promises plenty and, if they were watching tonight, the Magpies know they will have their hands full with promotion on the line.

Because all of Wellington's defensive work would count for nought if they were unable to reap rewards when enjoying ball in hand. But in that facet, the Lions have no trouble.

Boasting abundant threats all over the backline, the full nature of Wellington's threat was exemplified by the game's first try, when prop Reg Goodes ran a wonderful line to latch onto Cory Jane's inside ball, eventually handing off for Frae Wilson to cross.

That was a sign of things to come for Wellington, with backs and forward linking well to ensure the phase count was continually ticking upwards. Wellington also excelled at both the set piece and set play, with Marvin Karawana soon the beneficiary of a fine midfield move to score his side's second.

The first half saw Otago allowed only one sustained spell of possession at the right end of the field and, to their credit, the southern side's forward pack made the most of the opportunity, recycling the ball well to create a chance for James Lentjes to crash across.

But Wellington gave the visitors a taste of their own medicine after the break, with Ardie Savea soon finishing off a pushover scrum to essentially seal the result.