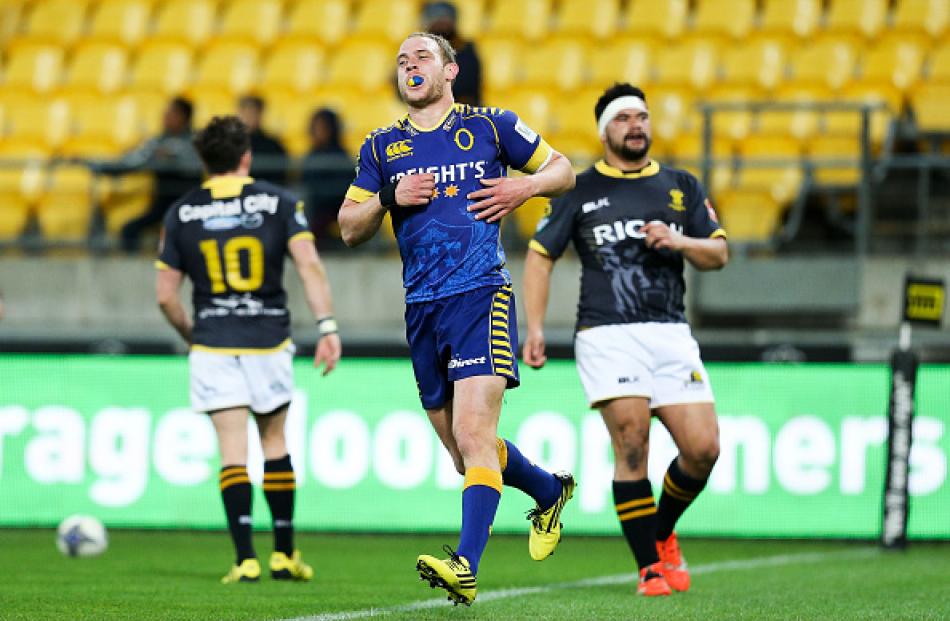 Matt Faddes put in a strong showing at centre for Otago against Wellington. Photo Getty

ODT Online rugby writer Jeff Cheshire rates the Otago players on their performance after their ITM Cup win over Wellington in the capital last night.

Michael Collins 6/10: Did well in his first game at fullback. Was generally very solid, made a try-saving cover tackle in the second half and put Dawai into a gap in the first, before supporting him and forcing Wellington to infringe, which resulted in three points.

Jayden Spence 5/10: Pretty quiet, did not see much ball, although did not do much wrong either.

Matt Faddes 8/10: Looks to be the answer at centre. Was involved in three tries, scoring two and making the break to get them down the right end of the field to score the third. Ran hard with ball in hand and was the best of the backs defensively.

Tei Walden 6.5/10: Solid for the most part, although made a couple of big plays near the end. Regathered Faddes' centering kick to keep the pressure on prior to the third try and made a break to move play 20 metres up field prior to the last one.

Tony Ensor 4.5/10: Seems to be trying hard, but is just too error-prone. Missed a couple of cleanouts which resulted in turnovers and tackling technique is still a problem. Ran the ball hard on attack although never really threatened and was good under the high ball.

Peter Breen 7/10: No more than solid in general play and had a couple of poor kicks in the second half. But was outstanding kicking at goal, taking all his chances other than an ambitious one from halfway, which was the difference.

Josh Renton 6/10: Pretty tidy, mainly just distributing to those outside him. Looked a bit indecisive early, but on the whole did well enough.

Mika Mafi 7.5/10: Had a huge 46 minutes, running the ball up hard and made plenty of tackles, while also doing well off the back of a struggling scrum.

Adam Knight 7/10: Was into everything, tackled all day, pushed Mafi over the line to score his try and was reliable at the lineout in the middle.

Naulia Dawai 7.5/10: Provided leg drive with ball in hand and looked dangerous in the open. Did well around the fringes and made an outstanding 21 tackles. Butchered a try by not passing late in the second half, although made up for it by scoring soon after.

Josh Dickson 6/10: Worked hard and was tidy, making his tackles and getting around the field well enough, although the tightness did not give him a chance to stand out in the loose like he can.

Blair Tweed 7.5/10: Never stopped all night and was outstanding in the work he got through. Was never far away in support on attack, often being bound to the ball carrier, while making an impressive 23 tackles. Took a lineout from a horrible throw just prior to the third try.

Donald Brighouse 5.5/10: Not hugely noticeable, although did not make too many mistakes in general play.

Sekonaia Pole 6.5/10: Got around the field well, was strong at the ruck and physical going into contact.

Aki Seiuli 6.5/10: Was energetic and threw himself into contact to add a dynamic dimension to the tight five.

Sam Sturgess 6/10: Solid on debut, got involved in the tight and made a few tackles. Lineout throwing wasn't great although the conditions made it tough.

Craig Millar 6.5/10: Tackled well, which is all he really could do as Otago had little ball during the 25 minutes he was on.

Hisa Sasagi 7.5/10: Another big performance, playing the last half hour. Made plenty of tackles, but more importantly made strong runs to put the defence on the back foot the phase prior to both of Otago's last two tries.

Tom Franklin 6.5/10: Was quiet for 20 minutes, then pushed Dawai over to score his try, before taking a great line on the inside of Fletcher Smith, running 30 metres and linking with Faddes who scored the winning try.

Dillon Hunt 7/10: Another who had little chance to do anything other than tackle, which he did well, making 13 in 34 minutes.

Kaide Whiting (No Rating): Played the last ten minutes and was tidy enough, possibly a bit hasty in tapping the penalty after Faddes' break and kick ahead five minutes from the end, although it worked out alright.

Fletcher Smith 7/10: Made an impact, throwing some nice passes and taking the ball to the line well throughout the last 15 minutes. Committed the defence and threw the inside ball to Franklin, which set up the movement for the final try.

Jack Wilson 6/10: Got the ball in space once, from a Smith cut out pass, and looked threatening, although did not get too much else to do.