Rugby: What's working for the Highlanders? 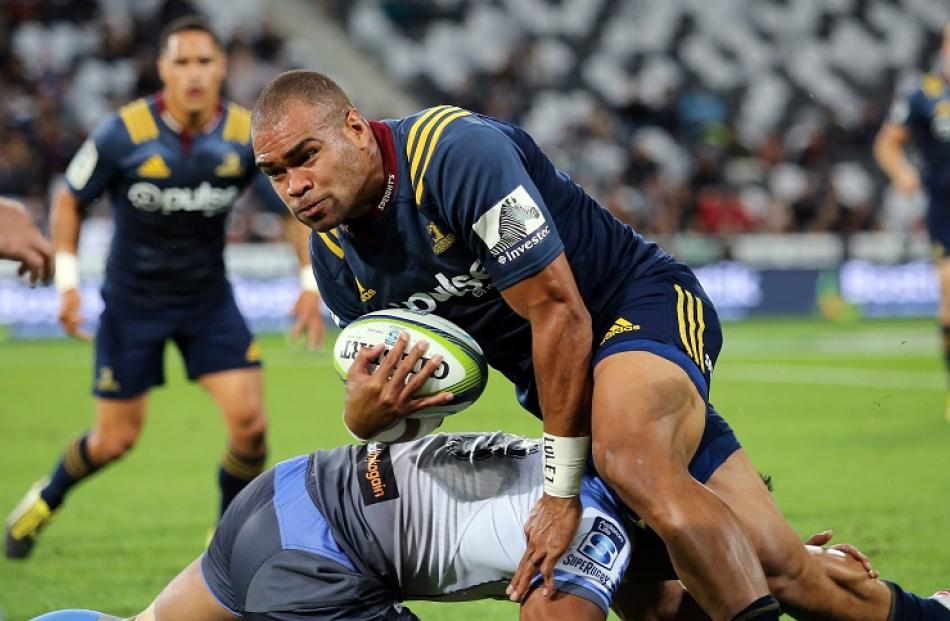 Patrick Osborne tries to bust his way past a Force tackler during their match in Dunedin earlier this month. Photo Getty

ODT Online rugby writer Jeff Cheshire looks at what has and hasn't been working for the Highlanders so far in this year's Super Rugby competition.

The kick and chase tactic the Highlanders used for the first month of the season was executed well. It was accurate, used at the right times and created pressure. Lima Sopoaga and Aaron Smith put up contestable kicks, allowing the chasers to either contest the ball or make a tackle to prevent the counterattack. Ben Smith has been outstanding on the chase, as per usual, while Patrick Osborne has won back his share of ball in the air too.

That game allows them to play in safer areas, while also providing the possibility of getting ball to run at a scrambling defence, or a forcing a mistake which can be pounced upon. But there have been times when the Highlanders have kicked too long to apply pressure, inviting the opposition to counterattack, or perhaps kicked too much. In the games they have played well, they have generally done it well, at least from inside their own half.

The Highlanders have shown fast linespeed and aggression in contact on defence in their wins. They have cut down the space teams have to run at them, meaning runners have often been knocked backwards before getting to the gain line. Teams have often completed between 10 and 20 phases and gone nowhere, forcing them into kicking or trying something risky.

They can be narrow in the way they match up, but shutting down space makes it hard to get the ball wider to exploit the gaps. When it does go wide, the Highlanders rely on the outside players to make good decisions and be accurate to shut the attack down.

Two years ago the Highlanders were bullied in the scrum by the top teams, before they started improving last year. This season they are not only holding their own, but looking dominant. At present they have a 95% scrum success, the best in the competition alongside the Crusaders. They are strong when pushing against the feed too, having won several scrum penalties from big shoves. It has remained that way with different combinations, showing the pack is strong as a group, rather than relying on one of two players.

Picking their moments to attack

Even with injuries to key players, there is still plenty of firepower in this team. They have strong ball-running forwards who can provide go-forward, which sets a good platform for the backs. From there they can get quick ball, while also using the width of the field to set rucks in different areas, making the defence reorganise laterally and go backwards as well.

That is not easy do if you are defending a team like the Highlanders, and if you are patient enough on attack, a gap will eventually open. They have players out wide who can exploit these, while Aaron Smith gets the distance on his pass that enables him to get the ball to runners hitting gaps at width from the base to catch the defence unaware.

The Highlanders have used seven- and three-man lineouts this season, but it is their five-man set that they have opted for most regularly, and they are slick in executing from it. A three-man pod sets at the front, with another two players at the back. They then come together and have several variations and usually at least three jumpers to go to.

That variety makes their lineout hard to read, while setting and then resetting in their formation means they are hard to match-up against. From the lineout they look to their backs, often setting a ruck in a narrow channel, or across the other side of the park. They have not gone to the maul so often as it is not one of their strengths.

Many teams look to crash the ball in the midfield off set-piece, but the Highlanders often look to go wide straight away, with either Malakai Fekitoa trying to get on the outside of his man, or the winger coming back in-field and setting a ruck.

That moves play a long way, meaning at least some players are going to have to get across from the other side of the field. Having a mobile forward pack and fit halfback become crucial and it can tire the opposition too.

From there they will use forward runners in narrower channels for two or three phases going back the other way, before looking to attack wider out. This gives them plenty of options on attack and can leave forwards defending out wide and having to cover more space.

Their other option is to use the blindside winger to crash one-off the ruck, before going through a similar sequence from there. This allows them to manipulate the defence, but also ensure they are getting the ball to their most devastating runners regularly.

It is hard to be too critical when a team starts with five wins in their first seven games. There has been a clear tactical change in the past two weeks though and that has seen them deviate from some of the areas they excelled in earlier.

Over the past two weeks the Highlanders have shown how much tactics can influence how well a team plays. Their patient, pressure-building approach has worked well. Their up-tempo, keep-the-ball-alive and run-from-everywhere approach has not.

You have to be pretty good to play that helter-skelter game and it might be a bit beyond this Highlanders team.  They have started forcing passes, running the ball from inside their own 22 and trying to attack without first building pressure. If anything they have put themselves under pressure and ended up dropping far too much ball.

While the defence has been arguably the key feature in their wins, it has been vulnerable in recent weeks. Against the Reds the line was not getting up as fast, meaning it was easier to get the ball wider and the likes of Samu Kerevi made hay. The tackling was poor too, meaning the Reds, and at times the Force, were able to get go-forward and the Highlanders had a harder time remaining organised, so gaps opened up and they leaked points.

Are they being worked out?

When you do something well at the top level, chances are teams will figure out a way to stop you doing it. Other teams are using the kick and chase effectively, putting pressure on the Highlanders from the get-go. At the breakdown they are going in more aggressively, forcing the Highlanders to commit more players or to have to deal with messier ball.

That is what happens, teams will do things to force you to change the way you play. Perhaps the past two weeks has been an indication of the Highlanders recognising this and trying to show they can play a different way, making them harder to work out.