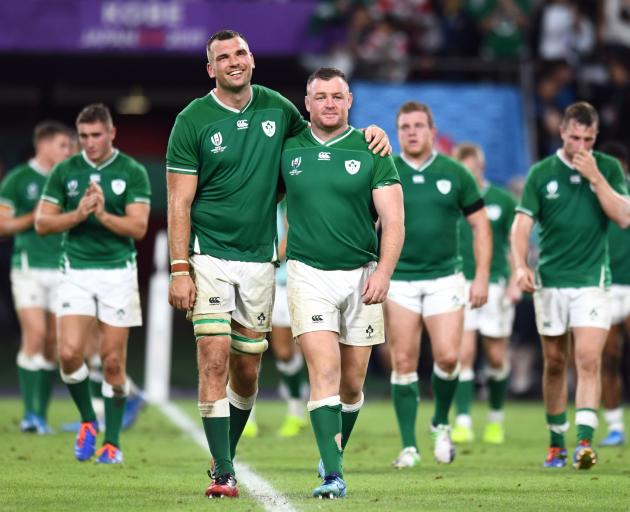 Japan's 28-21 victory over Scotland saw the tournament hosts top Pool A, and set them up with a quarter-final clash against the Springboks - a re-match of their famous meeting in 2015.

Their win dropped Ireland into second in the group, and leaves them locked in a quarter-final matchup with the All Blacks - a scenario that few rugby fans would have predicted at the start of the tournament.

The quarter-final, which will be held on Saturday at 11.15pm, will be just the second time the two sides have met at the World Cup, following a 1995 pool play clash which New Zealand won 43-19.

The two other quarter-finals will see England take on Australia and Wales play France.

The All Blacks have had an extra week off with their last pool game against Italy called off due to Typhoon Hagibis, leaving some concerns over their preparation, especially now that they will be playing a side who have given them troubles in the past few years.

Ireland, who have never made it past the quarter-final stage at the World Cup, had never beaten the All Blacks until 2016, but have won two of the last three clashes between the two heavyweights. They haven't hit their peak at the World Cup though, impressing against Scotland before being humbled by Japan. A 35-0 victory over Russia was ugly, though they showed more in their 47-5 win against Samoa on Saturday night.

Joe Schmidt's side will also be sweating on the judiciary, with star centre Bundee Aki receiving a red card in the Samoa win for a dangerous tackle.

When asked about playing the All Blacks, Schmidt acknowledged that his side will need to be at the top of their game.

"You have to be at your very best to have a chance," he said after the win over Samoa.

"The All Blacks are a team you can play at your best and still not get the result. They were not world No 1 for 10 years and are not back-to-back World Cup winners for no reason.

"For us it would be a mountain to climb, but after tonight the lads got their boots on and got a few crampons out and have taken a little bit of an ascent, but the whole thing gets steeper next week."

Munster winger Andrew Conway said that the All Blacks will 'definitely' know that Ireland can beat them, calling his side 'battle-hardened' due to not having their game against Samoa called off.

"You can look at it in a negative or a positive way. New Zealand will be fresh, we'll be battle-hardened," he said.

"I'd be surprised if they were scared of us but they definitely know that we can come and play and that we can beat them.

"They're playing ridiculously well at the moment. They just look sharp. They've timed their run nicely so we'll have to be at 110 percent to get stuck into them."