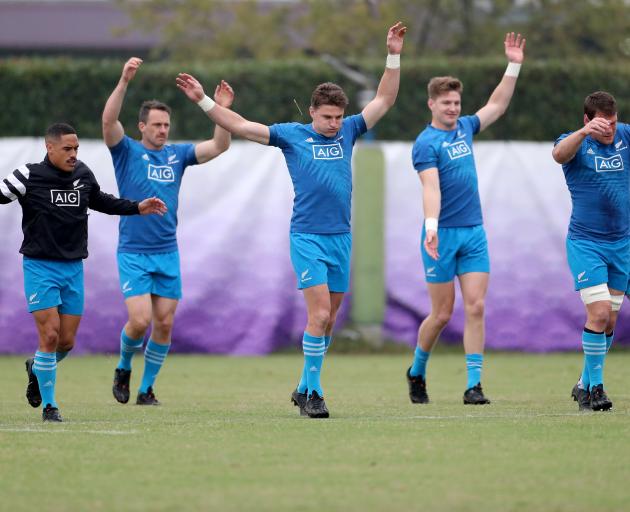 The All Blacks train ahead of tomorrow night's quarter-final clash with Ireland. Photo: Getty Images
The quarterfinals of the World Cup are on this weekend. There are some tough games to pick and it could go either way. Rugby writer Steve Hepburn has a look at the four games.

Why the Poms will get up

England has looked strong without being totally convincing in the three games so far. But that is England. The English have made an art form of winning without looking totally polished.

The side possesses a very solid pack and loose forwards who are strong and get round the field. No8 Billy Vunipola is back.

Out the back, England depends perhaps too much on Manu Tuilagi, but he is class.

If the side can play to its absolute potential it could go all the way. It has beaten Australia in their past six matches.

Why the Ockers will get up

After four years of underachievement and various sideshows, this is the defining moment for Australia. In fact, it is the biggest of big games for the sport in Australia. It is battling other sports and flagging interest, and a World Cup win would do a lot for the 15-man code in the country.

Australia can do it if it takes chances and use all its weapons.

Why the All Blacks will get up

The side has the ability to play all types of games and has the nous to withstand challenges. It has players in form and having not played last weekend, will be well rested and ready to hustle the Irish side. Has plenty of match winners in the team.

Why the Irish will get up

You are only as good as your last game. Well, when the Irish last played the All Blacks they were pretty good. A solid, no-nonsense forward pack which is strong in all facets. The world player of the year at first five-eighth and some exciting youngsters out wide. But the side is past its best, its set piece is creaky and its game plan is too old.

Why the French will get up

The French could click and win by 20 points. It's just as big a chance that they will fall over, but there are some French drums beating.

The side does have some up-and-comers who may star on the biggest stage. Its opponent has a one-dimensional game plan which France could exploit.

Why the Welsh will get up

The men from the valleys have been planning for this moment for years. Wales has developed a ruthless streak which has helped it out in close games, which this is bound to be. Has had the wood on the French in recent years.

Why the Japanese will get up

Riding a wave of support and playing an up-tempo game, the home side is ready for its latest challenge. The blitzkrieg defence will last 80 minutes and cause plenty of issues for the South Africans. Expect the usual heroics from the Japanese side, which will never die wondering.

Why the Springboks will get up

The side is peaking nicely and has no serious injuries. Coach Rassie Erasmus has the team firing well and its big forwards know how to strangle. And just before the tournament started the two sides played each other and the Springboks won easily. Revenge for 2015 will not figure prominently.