The New Zealand University team selected to contest the University world under-23 invitational tournament in Japan next week will have a strong Otago influence.

Seven Otago University club players have made the side and the management team is dominated by the club as well.

University coach Peter McIntyre will lead the side and will be supported by some familiar faces.

Otago University Rugby Football Club club captain Andy Ellis will manage the side, while University team physio Thomas Wardhaugh will help keep the players on the field with his healing hands.

The Otago University contingent includes Otago development prop Kilipata Lea and North Otago first five-eighth Michael Williams. Lea made his debut for Otago in the Ranfurly Shield defence against Thames Valley in July, while Williams has been a key cog for North Otago in Heartland competition.

Halfback Connor McLeod was initially named but had to pull out after being called into the Otago squad.

The team will assemble in Auckland this weekend before flying to Tokyo ahead of its first game early next week.

The games are contested over two 20-minute halves, so Ellis said the management tried to pick players who would have an impact in the abbreviated version of the game.

The tournament runs from September 16 to September 24. 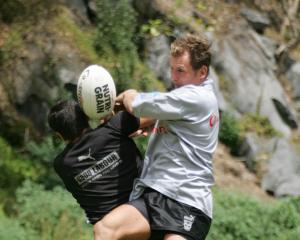