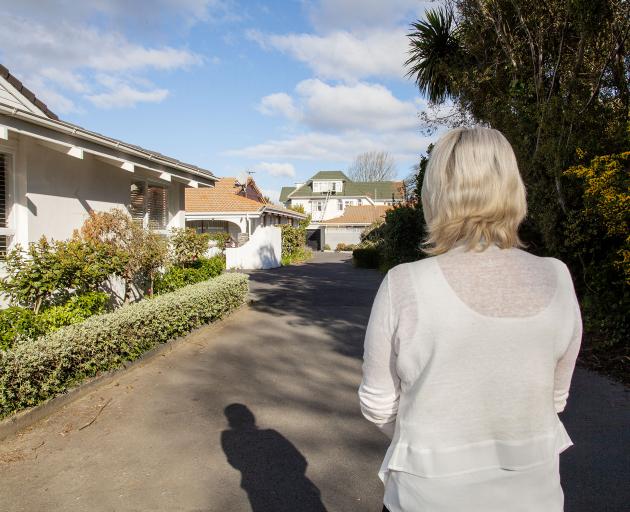 A resident looking at the properties owned by the Salisbury St Foundation. To the left is her home which she says has been devalued due to the close proximity of the foundation which houses serious criminals. Photo: Geoff Sloan
The director of a halfway house for serious criminals is refusing to answer questions about a neighbour’s claim the foundation has devalued her property.

A director of the Salisbury Street Foundation on St Albans St, Merivale, has not responded to questions from The Star about the matter.

Last month, The Star reported Mansfield Ave resident Ali Chapman claimed she would lose close to $200,000 of her property’s value because she lives next door to the foundation.

Recently, the foundation has expanded and bought more properties nearby.

In August, it increased the number of people it is able to house from 15 to 21.

The foundation purchased several properties next to Mrs Chapman’s home, and is now operating out of them.

Mrs Chapman said the foundation verbally told her when she wanted to sell, it would be interested in buyingher home.

Mrs Chapman believes other interested buyers aren’t willing to pay market value for her home because of its close location to the foundation.

The Star reported the city council was investigating a complaint about the foundation and whether it was operating lawfully, under the correct consents.

Said head of regulatory compliance Tracey Weston: “Upon receiving the complaint, our compliance team investigated the concerns raised and can confirm that all activities on this site are permitted.”