Prime Minister Jacinda Ardern has announced Auckland will stay in level 3 for another 12 days and the rest of New Zealand will remain at level 2 for the same period.

That would mean the current settings will be in place for 14 days - or one full incubation period.

The current settings will remain until 11.59pm on August 26, but Cabinet will review the settings on August 21, Prime Minister Jacinda Ardern has just announced.

"There is nothing to suggest we need to move to a level 4 lockdown at this stage."

Ardern said the move was in keeping with New Zealand's "precautionary approach". To support businesses Cabinet had made an "in principle" decision to extend the wage subsidy nationwide.

Moving Tokoroa, which has positive cases, into level 3 wasn't necessary because those cases were linked to the Auckland cluster and were isolated.

Auckland shouldn't be at level 3 for any longer than necessary.

"Short and sharp is best.

"But it is wise to take a bit of extra time."

The details for the extension of the wage subsidy would be finalised, but it will be nationwide and will cover the period of time that level 3 restrictions are in place.

She said the aim was to restore level 1 freedoms as quickly as possible.

Lifting restrictions now and seeing an explosion of cases later would be devastating for Auckland, and though level 3 was easier on the economy than full lockdown, she acknowledged that it would be hard on Auckland.

Ardern wouldn't be drawn on the impact of extending the alert level settings on the election date.

She added that the Electoral Commission had done planning around an election if New Zealand was at level 2.

She said reviewing settings on August 21 meant that it was possible, depending on what mass testing showed, to ease alert level settings before midnight on August 26.

She said the outbreak has been detected "relatively early".

The earliest case in the cluster was a worker at the Americold Coolstore in Mt Wellington who became sick on July 31.

This person may not be the earliest case, and the source of the chain of transmission has not been discovered.

She said the genome sequencing of the current outbreak is not the same as any other previous transmission, which suggests it is a new strain in New Zealand.

Ardern said the source of the infection was not "a burning ember" from a previous chain of transmission, given that the genome sequencing of this strain appears to be new.

She said again that the cluster will continue to grow, and it may be linked to more social gatherings, churches and schools.

"It is possible to contain a cluster or outbreak without having to identify its origin."

Ardern said the extra time to test meant that it wasn't necessary to find the source of infection, and previous clusters have been closed without finding the source.

Finding the source would still be preferable, she said, and efforts would continue to try and find it.

She said clusters couldn't be easily modelled, but past clusters had reached up to 100 cases.

The 1.5 million people in Auckland were "carrying a heavy load" for the rest of the country, she said.

"If you're in Auckland, please stay at home in your bubble. Wear a face covering whenever you leave your home."

"Download and use the app and make sure you can quickly access your movements in the last 14 days in case you are contacted by contact-tracers."

More than 30,000 tests have taken place, and 38 people are in quarantine as a precaution.

Why the decision was made

Ardern said moving all of the North Island to level 3 was unnecessary because all of the cases were connected, and all confirmed cases were in isolation.

But Auckland wasn't moved to level 2 given the churches and schools that positive cases had attended.

Ardern and her colleagues have been locked in a Cabinet meeting since 3pm, poring over Covid-19 data in order to come to a decision.

Ardern has been joined by director general of health Ashley Bloomfield at this evening's briefing.

Bloomfield said his advice was to continue the settings for 12 more days, but it was more important to have more time to see the extent of the outbreak.

"There may well still be the odd case and the odd new case in 12 days' time," he said, and the strength of the system was such that it could contact-trace and isolate cases quickly.

Bloomfield said the positive case in the Auckland Hospital was likely connected to the Americold workplace, though it hadn't been confirmed yet.

Bloomfield added 83 per cent of close contacts had been isolated within 48 hours, which was above the gold-standard of 80 per cent. 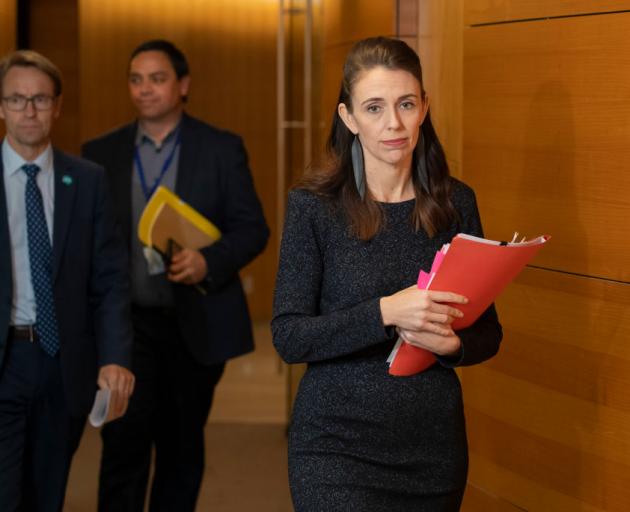 Ardern said the wage subsidy would be extended to protect jobs.

The details will be finalised, but it will be nationwide and will cover the period of time that level 3 restrictions are in place.

Ardern said the extension of the wage subsidy had expected to cost $2.6b to $3.9b, but only about $2b had been allocated so far, so there was breathing room to extend it further.

She said Auckland Transport had 44 construction sites operating, while five sites and 1200 workers continued on the City Rail Link.

"Houses continue to be built in Auckland."

All of this is happening because of the protocols of operating safely at level 3, including social distancing at worksites, she said.

Finance Minister Grant Robertson - who took to the podium after 6pm - said a lot of New Zealanders had now used their sick leave and so extending the wage subsidy scheme would give people confidence to stay home if they were sick and got tested.

Early estimates are this extension would come in under $1 billion.

Robertson said regional boundaries didn't really work because a lot of businesses worked both inside and outside of Auckland.

"Administratively it would have also made it a lot slower to get it out the door."

The two-week timeframe was based on the impact of alert level 3, Robertson said.

All of the other schemes, like rental support, are also being looked at.

Robertson said a lot of economic assessments didn't factor in the flow-on effects of locking down Auckland.

"We have never wavered from the view the best response is a strong health response."

Robertson said "so far, so good" with operating different parts of the country in different levels and there hadn't been any specific concerns so far.