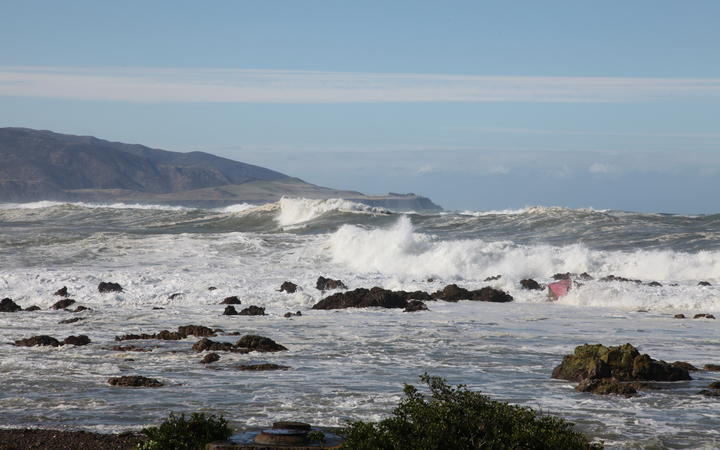 The National Institute of Water and Atmospheric Research (NIWA) has conducted the first-ever national assessment of both people and buildings at risk from tsunamis.

It found in total tsunami evacuation zones cover an area of 2709 square kilometres.

Within that area, there are 8949 critical buildings, such as hospitals, government and emergency management buildings within the boundaries, including 195 hospitals and medical buildings, more than 1000 schools and education facilities, and 23 airports.

The national guidelines for tsunami evacuation zones places them into either red, orange or yellow categories.

Red zones represent tsunami threats to beach and marine environments, while orange and yellow zones are areas that should be evacuated in a large tsunami event.

NIWA hazards analyst Ryan Paulik said previous studies had shown the difficulties both children and the elderly faced when having to evacuate.

"Knowing who and what is located in a tsunami evacuation zone provides a starting point for emergency managers to carry out detailed preparedness and response planning," he said. 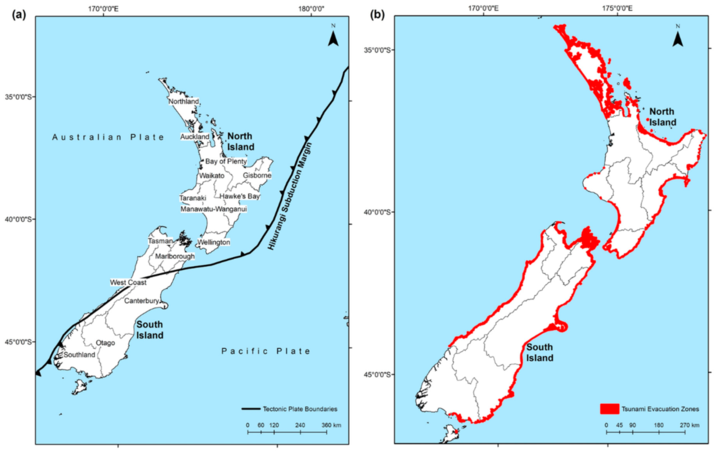 (a) New Zealand regional authority boundaries and (b) coastline coverage with mapped tsunami evacuation zones. Photo: NIWA
The study is the first time all the regional data and information has been collated, forming an overall picture of the country.'

"What we have done is to provide a focus to better inform modelling methodologies that will enable this kind of analysis to be done on a routine basis," Paulik said.

"They also highlight a need for disaster risk managers to proactively prepare populations for evacuation based on their vulnerability to harm and ability to access resources for recovery after the event."

It also pinpointed areas which were particularly at risk, such as the Hawke's Bay, where 13,000 people live in red and orange zones, while directly off the coast lies the Hikurangi subduction zone, capable of generating large tsunamis from earthquakes of more than magnitude 8. 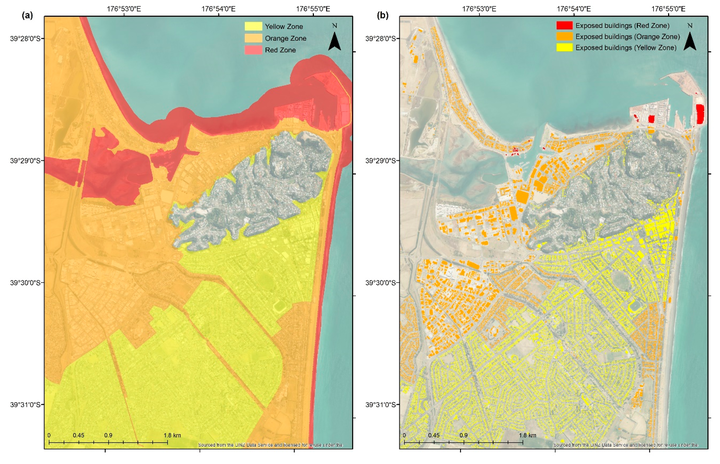 "Remember: Long or Strong, Get Gone.

"If you're in a coastal area, and feel an earthquake that lasts longer than a minute or strong shaking that makes it hard to stand, don't wait for an official warning; move immediately to the nearest high ground, out of all tsunami evacuation zones, or go as far inland as possible."