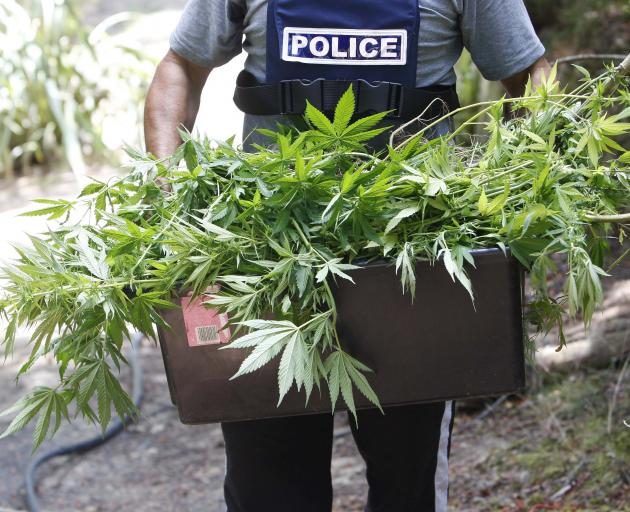 A police officer carries cannabis plants seized during a raid in Northland. PHOTO: SUPPLIED
Legalising cannabis may put more pressure on police resources and, if the pricing system is not correct, could fail to dent the black market, the Police Association says.

The association has not taken a firm stance either way on the upcoming cannabis referendum, wanting instead to ensure people have enough information to make informed decisions themselves.

Association president Chris Cahill said his group could see some pros and cons in the proposed legislation.

The age restrictions, THC level limitations, and restrictions on advertising were all very positive, he said.

But some of it would be hard to police, such as the limitations on the number of plants that could be grown at home.

"How do you actually know whether someone’s got three plants or six plants or 12 plants, so that can become difficult."

The proposed regulatory system includes a variety of taxes and licensing fees, which could also make it too expensive for local growers to enter the market, he said.

"We think some of the legislation around who could actually produce it will mean it would actually be quite hard to produce it at a cost that can compete with the black market.

"If the black market provides a better price for THC content then I don’t think you’re going to drive them out."

As a Class C drug, the criminal penalties for possession and use of cannabis are at the lower end of the criminal justice scale. The maximum penalty for possession or use is a three-month jail sentence or a fine not exceeding $500 or both, but there is a statutory presumption against imprisonment.

Information released under the Official Information Act shows court proceedings for cannabis offences dropped from 314 to 289 in the Southern policing district between 2015 and 2019.

Over the same period, the number of warnings jumped from 291 to 438.

That mirrored the national trend in court actions and warnings.

"People think police spend a lot of time policing cannabis, but in general they don’t.

"It’s either found during other police activity, or the more widespread thing is when they’re investigating organised crime groups, and some of their activity is cannabis."

Mr Cahill said there was concern about the impact on rates of people driving under the influence of drugs.

"The presumption there’s going to be more cannabis use and therefore more drug-impaired drivers isn’t really supported by the evidence.

But, he said, "you might argue that by legalising something, you then make it that while there might not be more people smoking it, there may be more people who think, ‘Well it’s lawful so I’ll also drive under the influence of it’."

Night in cells after false 111 call