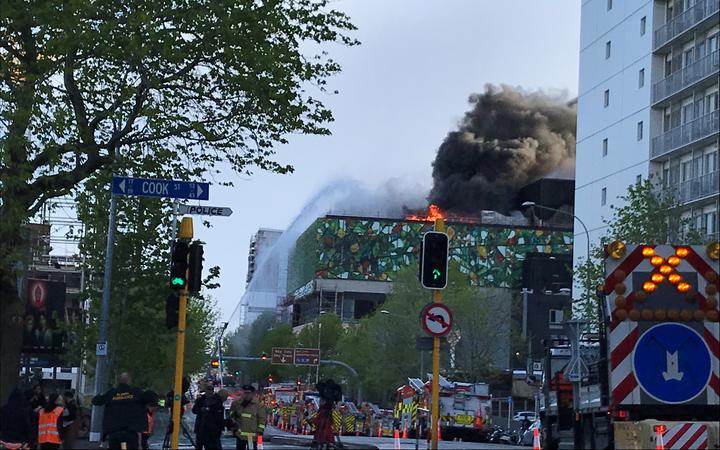 Flames and smoke were still coming from the roof of the convention centre this morning. Photo: RNZ

Fletcher Building has confirmed there were no active alarm systems at the SkyCity Convention Centre in Auckland and the fire that turned into an inferno was first spotted by a supervisor.

The massive blaze has continued to burn since it started yesterday afternoon - despite firefighters using 12 million litres of water fighting the fire.

Massive flames and black smoke continue to pour from the site with more than 80 ground-based firefighters using high-powered hoses to try to quell flames.

Fletcher Building CEO Ross Taylor told reporters today that the fire started where blowtorches were being used on bitumen to seal roof joints. The company remained committed to completing the $700m convention centre.

He said he was at the convention centre site yesterday morning in a hard hat checking out progress.

Meanwhile, firefighters say they're trying their best to get the fire under control after it broke out around 1pm yesterday. Twenty-six appliances are on the scene with laddered hoses trying to reach to the top.

But fears are no longer held that a large crane might topple over, as the huge fire continues to burn.

Fire and Emergency Auckland regional manager Ron Devlin told First Up there was some worry last night that if the crane overheated it could fall, but he was now confident it was safe.

He said a firefighter who was taken to hospital yesterday for tests and monitoring has been released.

Auckland traffic was at a standstill this morning with several roads closed - and many workplaces have agreed to keep staff at home.

Mr Devlin said the blaze did what firefighters expected overnight, and a large part of the roof was sacrificed as planned to safeguard the lower reaches of the seven-storey-building and planning teams were putting in place their strategy for the day.

"The strategy is... how we now contain it in that space and everything is looking reasonably positive towards that."

Specialist investigators would start work on the cause once it was brought under control. 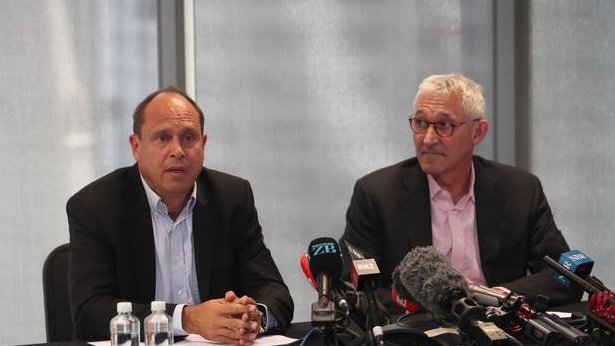 FENZ assistant area manager Dave Woon spoke to the New Zealand Herald this morning, revealing more about the strategy around fighting the fire.

He said about 30L per second was being pumped at the blaze, but the wind was blowing it around meaning the work was "arduous".

Two lanes are open on Nelson St, part of Hobson St is closed, and Wellesley West St is closed between Hobson and Nelson Sts.

Auckland Emergency Management said diversions were expected to remain in place until at least mid-morning and commuters should expect major delays.

"It will be a slow journey in [on Wednesday]. If you can avoid coming into the city, do."

"There will be ongoing disruption [Wednesday] morning, while roads remain closed and public transport is diverted.

"We urge people to use their common sense and not put themselves in harm's way by standing in smoke plumes or downwind of smoke." 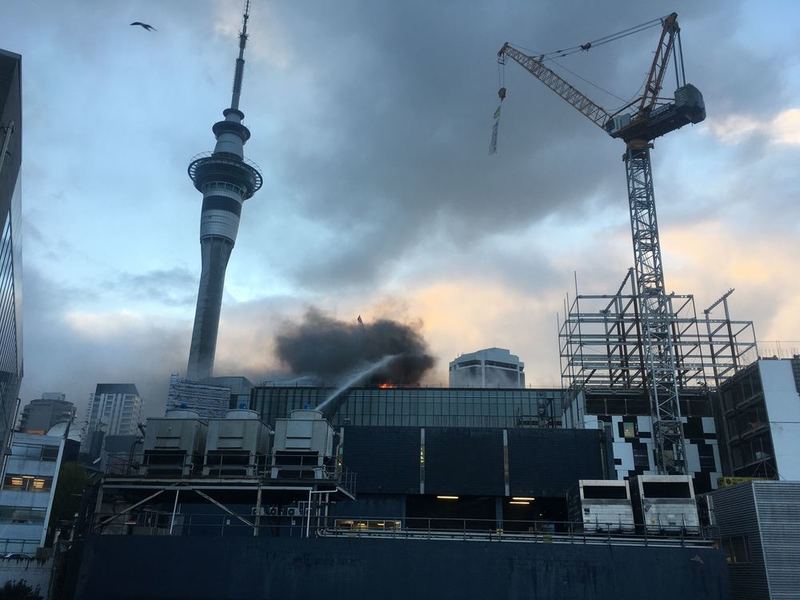 Dawn reveals the mammoth task facing firefighters. Photo: NZ Herald
Flames engulfed the top of the building yesterday afternoon, starting on the seventh floor - the roof - before spreading to the sixth. The cause of the fire has not been confirmed, but the New Zealand Herald reports it is thought to have bee ignited by a worker's blowtorch.

Prime Minister Jacinda Ardern, who usually spends Wednesdays in the capital, changed her plans and will meet Fire and Emergency staff this afternoon.

She is also expected to meet representatives from SkyCity and Fletchers.

Firefighters worked into the night, abandoning the roof, and focusing their efforts instead on preventing further spread to the lower levels.

Dozens of fire units were on the scene, with additional help even arriving from the Hamilton Fire and Emergency branch.

Smoke continued to billow from the building into the CBD precinct yesterday, affecting workers and residents nearby. Those in the area have been warned to either avoid the blocks around SkyCity if possible or take precautions to avoid breathing in the fumes. 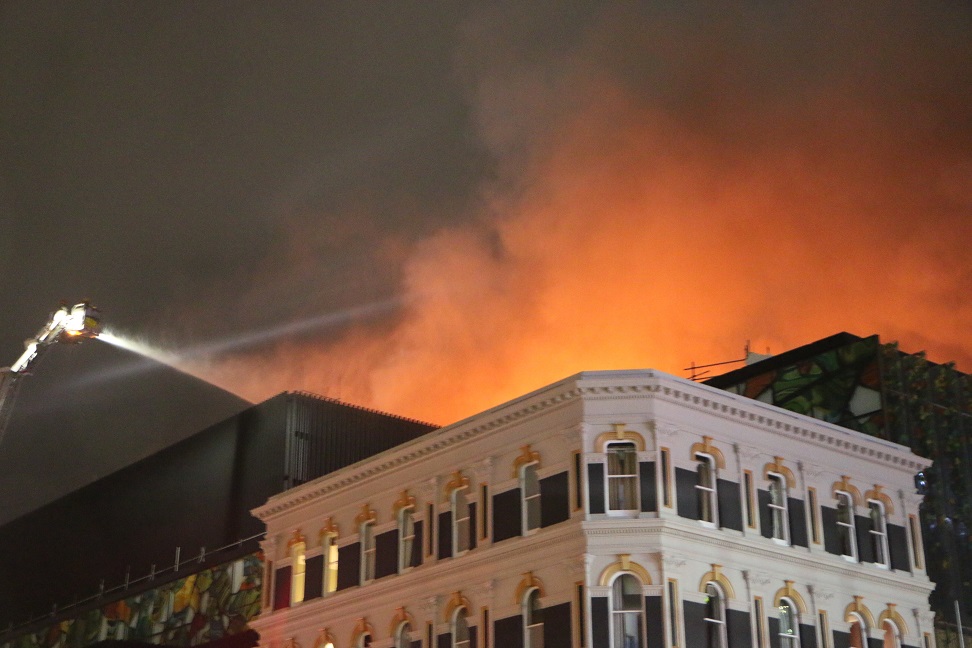 Flames were visible through the night as the fire continued to burn. Photo: RNZ
Firefighters face a battle on another front this morning, with a severe weather warning forecast for Auckland - including heavy showers, thunder, hail and gales gusting 100km/h set to strike.

SkyCity evacuated its entire Auckland precinct, because of smoke from the fire, with people forced to leave the Sky Tower, casino, all SkyCity hotels and restaurants and corporate offices.

Auckland Mayor Phil Goff told Lately yesterday that they also had to tell staff to leave the council building, adjacent to SkyCity, yesterday afternoon when the hazy atmosphere made their offices "uninhabitable".