The Milford Road is to remain closed for a third day due to the high risk of an avalanche, while a snow warning is in place for several alpine roads in the South Island.

Porters Pass and the Lindis Pass are expected to get snow showers from Thursday afternoon, the MetService said.

Up to 6cm of snow was forecast for the Lindis between 5pm and 9pm on Thursday.

Between 10pm on Thursday and 5am on Friday, 2cm to 4cm of snow may settle on Porters Pass near the summit.

Meanwhile, State Highway 94 between Te Anau and Milford has been closed since Monday.

The MetService has forecast snow showers to affect the road again  from Thursday afternoon, with between 12cm to 18cm of snow to accumulate on the road above 700 metres with lesser amounts down to 500 metres.

The NZTA/Milford Alliance advised there is significant avalanche activity today and the Milford Road was likely to remain closed on Thursday.

UPDATE 10AM, WED 16 SEP#SH94 Milford Rd is going to remain #CLOSED today, Wed 16 Sep, and overnight due to a high avalanche risk. Contractors will provide the next update by 7:30am, Thu 17 Sep. ^IF pic.twitter.com/UcTEE4qbgQ

Snow showers are forecast for the Crown Range Road, linking Queenstown and Wanaka, during Thursday afternoon and evening.

Between 5pm and 9pm, expect 3cm to 6cm of snow to accumulate on the road above 700 metres with lesser amounts down to 500 metres.

Meanwhile, drivers are being asked to take care on State Highway 6 between Haast township and Makarora as more heavy rain is forecast today.

The main link between the West Coast and Otago was closed on Monday afternoon when torrential rain triggered a major slip at Burke Flat.

The road reopened to traffic just after noon, but only one lane was open at the slip to allow crews to continue the clean-up.

Drivers needed to be aware "that trees can come down given the drenched conditions, and to drive accordingly", Ms Whinham said. 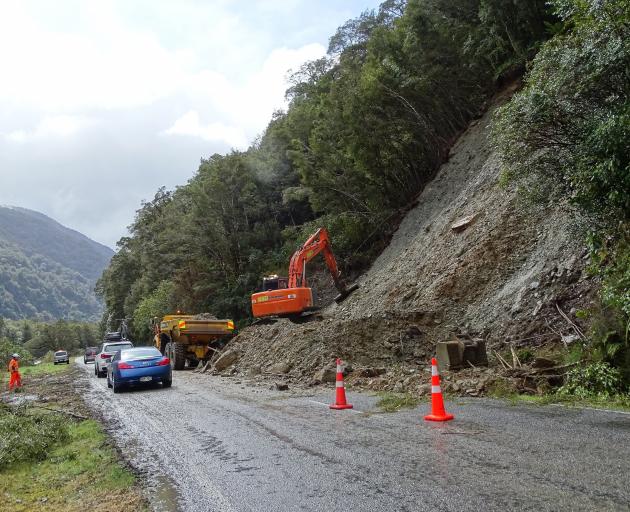 Road crews continued to clear away mud from the slip at Burke Flat as the first cars drove north on State Highway 6 after one lane opened to traffic just after noon yesterday. PHOTO: KERRIE WATERWORTH

In a media advisory, the Queenstown Lakes District Council said "caution" was required for motorists travelling around the rockfalls.

Council spokesman Jack Barlow said the rockfall was "very minor" and happened on the stretch of highway occasionally when it rained.

"There are no road blockages, or danger [to motorists]," he said.

Motorists travelling over the Crown Range were advised to carry chains.

While the weather posed some problems for motorists, it brought snow to southern skifields.

Coronet Peak assistant ski area manager Mark Sommerville said they had had 15cm overnight "and the snow is forecast to keep falling for the next two days".