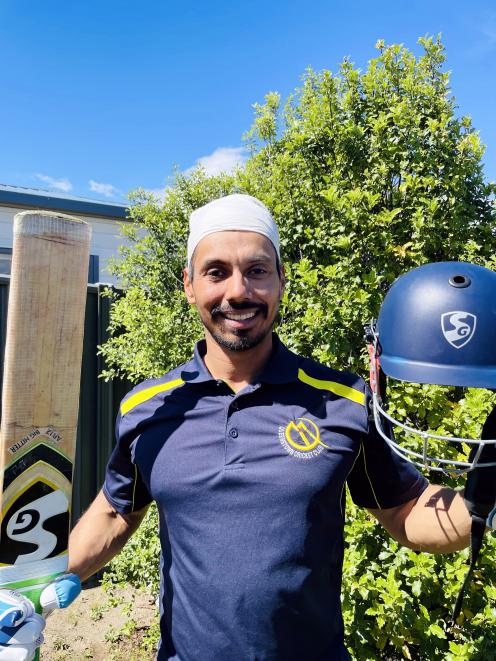 Amrit Gossal and the tools of his trade which had a busy weekend. PHOTO: SUPPLIED
It would be fair to say Queenstown cricketer Amrit Gossal had his eye in over the weekend. He managed to hit 45 sixes — 270 runs went over the rope from his bat.

The 30-year-old hit 377 runs in two innings in as many days in what was a power display of hitting.

First up on Friday night, Gossal played for the Wakatipu Warlords in the Queenstown twenty20 competition.

He went to the wicket and smashed the ball to all parts of the Queenstown Events Centre and made 160 off just 73 balls. Well over 130 runs were made up of boundaries. He hit 17 sixes as his side amassed 255, and not surprisingly won the game.

Not a bad effort from Gossal and it gave him some confidence when he played for the Queenstown team in the senior Central Otago competition on Saturday.

The side took on Blacks Hill at Jack’s Point and Gossal opened for his side in the 40 overs match.

Gossal had his first six in the second over and then did not stop.

The right-hander hit 28 sixes and nine fours. The boundaries are not that large at Jack’s Point — about 50m in some areas — but still the ball had to be hit.

"I got some confidence from what I had done on Friday. So I just started swinging. There was a few overs there when I hit four sixes," he said.

"On Saturday the boundaries were a little bit smaller than Friday. I hit them everywhere — all round the park. I had no idea what my score was. I just kept hitting — that is my game."

He was eventually out in the 25th over as Queenstown went on to amass 440 off its 40 overs. Blacks Hill in reply scored 180, giving Queenstown a 260-run win. Originally from India, Gossal has been living in NZ for five years and currently resides in Cromwell but still plays for Queenstown.

The road worker usually plays for Otago Country but has babysitting duties over the weekend as he has a young daughter.