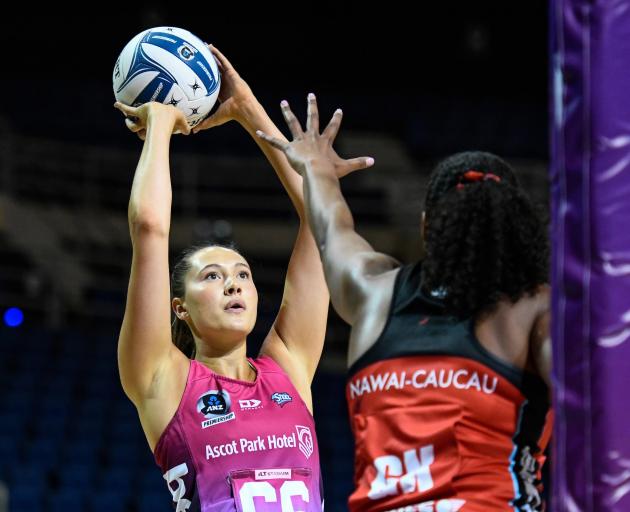 The star English goal shooter made her way to the bench with eight minutes to play, an almost unthinkable scenario under most circumstances.

This was not your typical early season display, though.

There were dysfunctional patches, yes.

But slick connections and the seamless introduction of newcomers left the Steel in a more than comfortable position.

While the Tactix made a late run to pull that back to 71-54, the game was well over by that point.

The Steel made a winning start to its ANZ Premiership season in Christchurch yesterday, showing no sign of rust.

Fisher was her usual, consistent self.

The 23-year-old barely made a mistake in draining 47 of her 50 shot attempts.

It was far from a one-person show, though.

That 90% combined accuracy allowed it to fully capitalise on the ball won further back.

And there was plenty of that.

The Tactix attack was disjointed for large parts, at times throwing ball to Steel defenders, at others simply throwing it over the baseline.

The Steel was not perfect in that regard either.

Notably it let slip through the second quarter, as turnovers crept into its game as the Tactix lifted their intensity.

But every time the hosts threatened a comeback, the Steel responded — an intercept and deflection from new recruit Kate Burley particularly key midway through the quarter.

It was a performance that pleased Steel coach Reinga Bloxham, although she did admit the team still had room for improvement.

"I think at times we were a little bit patchy," she said.

"That’s the pressure I hoped we’d be put under. Seeing how we’d react to it was probably really good learning for us.

"At times I thought we were good, and other times we didn’t react so well.

"I think it was a good indication of things to come. We’ve still got some room for improvement. But we’ll still celebrate the little things we did well today."

Bloxham had been pleased with how Tui had slotted in, remarking that the 20-year-old had been nervous prior to her first game for the team.

She felt the goal attack, who has predominantly played goal shooter up until now, had been part of a well connected attacking end.

"I thought George Fisher and Saviour Tui did a really good job today in the circle. They haven’t had a lot of time together, but obviously in the last three or four weeks they’ve really worked hard.

"Having Shannon [Saunders] back with us as well helped solidify the attacking end and keep them glued together. I thought they did a great job."

The Steel took the advantage from the get go, as Renee Savai’inaea picked up a loose ball and Tui hit her first three shots to make it 3-1.

It quickly became 7-2 as Fisher showed athleticism and great hands to pull in impressive feed receptions.

The Steel led 19-13 at the first break, before the Tactix had their best period.

They brought energy and intensity to force the Steel into several turnovers early.

That got the margin back to four, before Burley turned over ball to help stem the bleeding.

The Tactix hit back again late in the half, getting the score to 30-27, before the Steel finished the half well to lead 32-27.

From there the Steel pulled away, dominating the third quarter to comfortably cruise to victory.

In the other game yesterday the Magic beat the Northern Mystics 46-43.