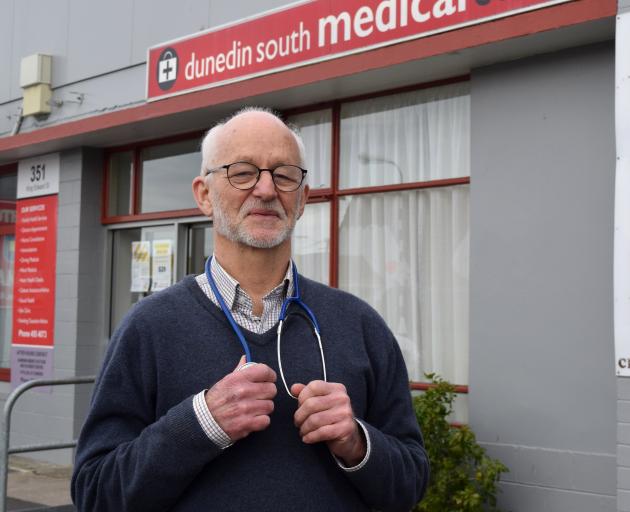 Dunedin South Medical Centre general practitioner Andy Stewart retired after working in the same practice for 40 years. PHOTO: SHAWN MCAVINUE
A doctor has hung up his stethoscope ending a more than 40-year career in South Dunedin.

Dunedin South Medical Centre general practitioner Andy Stewart, speaking to The Star on his final day of his career last week, said he had worked in the same room in the centre - behind the same desk - for more than 40 years.

"General practice is a great life ."

"All dressed up with a cap on, short pants and a jacket."

The feelings book-ended his working life, he said.

After graduating at the University of Otago in Dunedin in 1973, he sailed from the city on a year-long expedition to Fiji.

"Sailing around the amazing islands — with no other people — living off the land, eating pawpaws."

On returning to New Zealand, he worked as a doctor in Outram for two years, Nepal for a year, then returned to Dunedin to start work at the centre.

"I’ve been here ever since ... Dunedin is an amazing place — I can’t imagine living anywhere else."

He met his wife, Diana Struthers, at university and the couple raised seven children.

"While she was working and I was delivering two babies a week ... they were busy years but great years — delivering babies was an amazing part of general practice."

He had been the family doctor of many generations from the same family, he said.

"At one stage I was looking after five generations — from great-grandparents down to babies."

A negative aspect of the job was the growing amount of paperwork doctors had to complete, he said.

"It takes a huge chunk out of your life."

In retirement, he would continue to care for his flock of sheep he owned at Doctors Point, gardening and trapping pests, such as stoats and rats.

The rest of the time he would walk his dogs, sail the 3.5m-long yacht his father built when he was a schoolboy and spend time with his three grandchildren.