A total of four officers and 53 soldiers from Bravo Company (Dunedin) 2nd/4th Battalion Royal New Zealand Infantry Regiment (RNZIR) conducted a two-day field exercise in a forest area near Moneymore, at the end of March.

The 2/4 RNZIR officer commanding Bravo Company (Dunedin) Major Duncan McEwan said it was an excellent opportunity for the many new recruits to learn how to work within their sections and for the section command team leaders to integrate these new members into their teams.

"The focus here today was for the young soldiers to learn the necessary skills needed to work effectively as a small unit in the field. 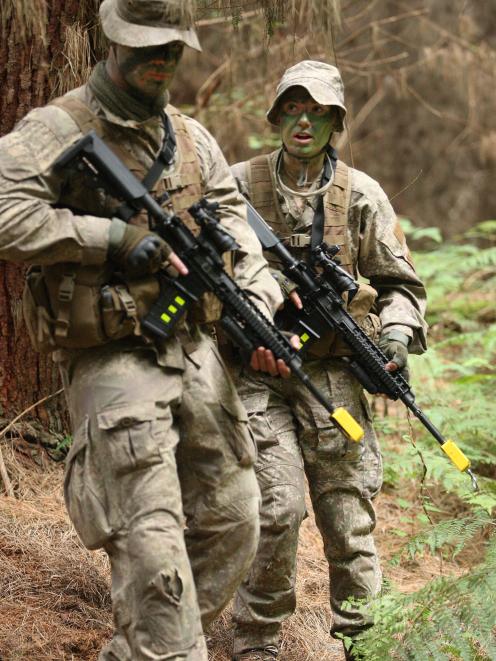 Section commander Lance Corporal Kate Downie-Melrose, of Dunedin, gets Lance Corporal Bryn McLeod-Jones to move into a better position.
"What they learn here today will be carried forward to help them contribute to the major New Zealand Army exercises they will be taking part in later this year," he said.

The soldiers from Invercargill, Dunedin and Cromwell worked on a variety of tasks including immediate actions in the event of an enemy contact to their front or rear, battle drills using a variety of weapon systems, patrolling and searching techniques, all while learning to work together to ensure the safety of their fellow soldiers on the battlefield.

While working in the forests the soldiers also received a visit by the unit’s Honorary Colonel, Greg Hart.

"It was outstanding to see so many new men and women taking part in this field exercise.

‘‘When you have numbers like this it is an acknowledgement of all the hard work the unit’s command team had put into keeping their soldiers motivated and prepared.

‘‘Having large numbers on the ground serves to encourage others to join the training," Col Hart said.