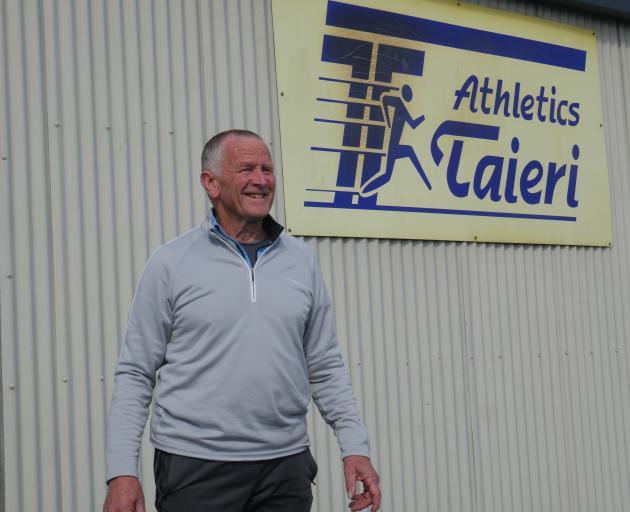 Athletics Taieri convener Rob Urquhart outside the clubrooms at Memorial Park. PHOTO: JESSICA WILSON
In a new series, The Star is investigating the state of clubs in Dunedin. This week, reporter Jessica Wilson chats to athletics clubs about the future of the sport.

Five of the city’s athletic and harrier clubs - Hill City-University, Leith, Taieri, Ariki and Civil Service - have reported declining numbers over the past decade.

Caversham is the only one to buck the trend, its membership having remained steady.

Clubs are adapting to keep athletes and attract new ones.

When Chris Sole took over as Leith president last year he wanted to get more people involved.

"Our main focus is on providing opportunities for people who want to participate, even if in a low-key way, without having to register," Sole said.

Registration costs - split between the club, Athletics Otago and Athletics New Zealand — might be putting people off joining clubs, he said.

Becoming a registered club member allowed athletes to be selected for Otago or New Zealand representation, he said.

"In the past that would have been the main focus of many elite athletes and that seems to not be the case at the moment."

The club had about 45 members, about the same as the previous year.

Although he was optimistic about its future, it was still uncertain, he said.

"The long-term focus is whether we can survive as a club, and whether that is possible I’m not sure."

Hill City-University president Richard Fogarty said although the club’s membership had "significantly dropped" over the past five to 10 years, it was still in a good position.

"We’re doing all we can to mix it up, be innovative, to be creative to try to cater for [what athletes want]," Fogarty said.

The club was still in "good heart", and had good people and a community vibe, he said.

Fogarty was just one of the club representatives who highlighted the growing popularity of parkrun.

The set 5km course is free and held at the same time each week.

"It’s hard to pin any one down, really."

A few years ago there could be about 350 people at a Tuesday night meeting. That was down to about 60 now.

Lifestyles had changed and people worked longer hours, had bigger mortgages to repay and were busy taking children to other activities, he said.

The club had about 150 members, which was still strong, he said.

"I don’t think we’re ever going to see a big boost in numbers again.

Civil Service president Robert Homan said the club was small compared with others and the goal was to recruit new, younger runners.

There was a good group of 10-15 walkers each week, and about six runners on a good day, Homan said.

"We’ve got pretty good numbers, but we’d like to have more."

Membership had "certainly" decreased, mainly due to families moving away, he said.

Ariki president David Crewe said a few years ago club numbers dropped but the club had since managed to "steady the ship".

The club had a strong junior section but, as with many sports, children stopped at around 11 or 12 years old, leaving a gap between juniors and masters, he said.

"There’s going to be a big hole for the next few years."

But not all clubs had taken a hit.

Caversham president Ken Fahey said while the club was aware of the decline in athlete numbers around the city, it was holding its numbers "really very well".

New members were joining as recently as a few months ago, Fahey said.

"We go a little bit against the trend... but we’re very much aware that athletics is one of the sports that is struggling."