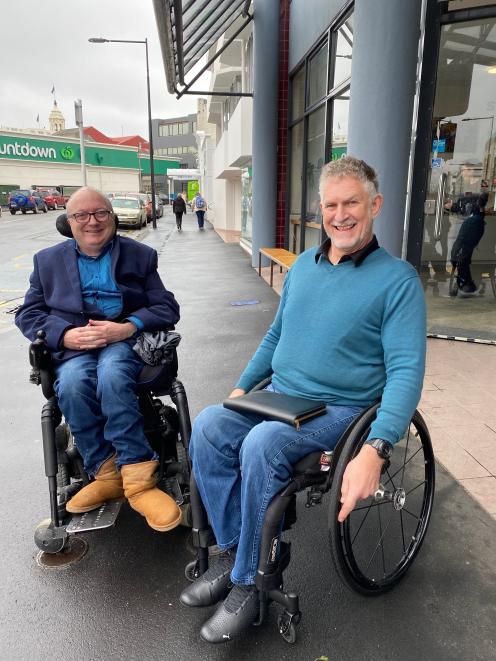 Highlighting the need for wider discussion of disability issues this election season are Disabled Persons Assembly kaituitui-administrator for Dunedin Chris Ford (left) and Access for All and Disability Information Service access adviser John Marrable. PHOTO: BRENDA HARWOOD
The level of discussion around issues of importance to the disabled community in the 2020 election campaign has been disappointing, Dunedin disability advocates say.

Disabled Persons Assembly kaituitui-administrator for Dunedin Chris Ford and Access for All and Disability Information Service access adviser John Marrable said there had been little interest in disability issues from politicians this election.

"We would have liked to see more engagement and a higher level of discussion," Mr Ford said.

A planned Dunedin election forum on disability issues had to be cancelled due to the city’s unexpected snow day earlier this month, which meant a hoped-for discussion involving the major parties had not gone ahead.

However, nationally, disability groups had had difficulty in getting interest from political parties in taking part in meetings.

"That’s very disappointing for the disabled community, which is facing perennial issues that have been talked about for years, with little traction gained," Mr Ford said.

Since many disabled people struggled to find the energy to fight for their rights, organisations such as the Disabled Persons Assembly, the Access Alliance, Blind Citizens, and others existed to be a voice for them into government, he said.

"It’s all very well for politicians to say things will happen during election campaigns, but we need some more action."

Kainga Ora (formerly Housing NZ) focused on making just 15% of its properties accessible, when the disabled community made up about 24% of the population.

People with disabilities were also often on low incomes and faced a higher cost of living that the general population, so affordable housing was essential.

Mr Ford, who is himself living in transitional housing, said finding housing in the private sector was almost impossible for disabled people, and it was even harder for them to buy.

"There is a real need for whoever is the incoming government to address barriers to housing for people with disabilities and also the wider community," Mr Ford said.

"Housing is a human rights issue, and the next government needs to recognise that."

The NZ Transport Agency’s response to the Covid-19 pandemic, in which it had made mobility vans and taxis free for disabled people and the elderly, had proven a boon for many.

"It was great that disabled people were given that access, and many people took advantage of the opportunity," Mr Marrable said.

Mr Ford said during the months the free transport was available, disabled people were able to access their own community more freely.

The issue of accessible and affordable transport was of vital importance to disabled people across the country and affected their ability to live and work.

He had a bouquet for the Electoral Commission, which had approached him for advice on making voting places accessible for all.