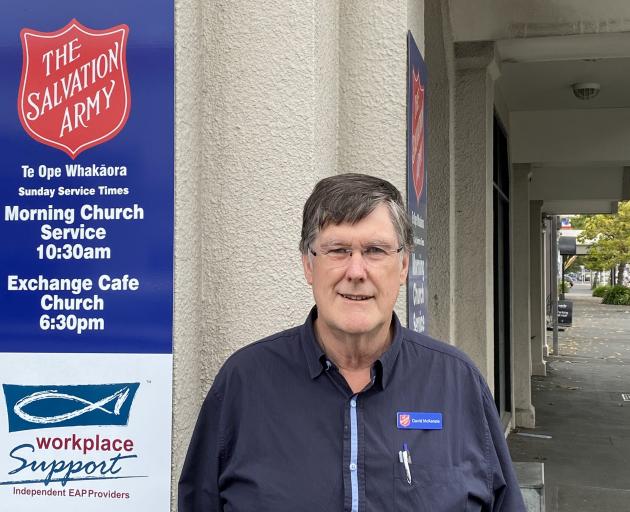 The report, which was to have been launched in Dunedin last week at an event that was cancelled due to the heightened Covid-19 alert levels, contains some concerning headline figures.

These include the rapid increase in the number of children in benefit households — more than 23,000 nationwide during 2020 — and the fact that the Salvation Army distributed 113,000 food parcels last year.

However, not all of the news is bad, and some trends are improving in the city, Salvation Army Dunedin Community Ministries manager David McKenzie says.

In Dunedin, demand for food parcels remains "steady" for social agencies — although numbers are up by about 25% to 30%.

"There was a big increase over the Covid-19 lockdown period, which was largely in response to Civil Defence-related need.

"But after lockdown, and in the months afterwards, the need didn’t carry on where expected, and that related to the supports put in place by the Government — the $25 extra per week and the increased winter energy payment."

Overall, the New Zealand economy was hit less severely than first anticipated, and wage subsidies softened the economic blow for many, at least for a time.

In Dunedin and Otago, unemployment had risen, although not as severely as had been feared.

However, people on low incomes and in part-time work had been affected disproportionately.

"I believe there really has to be a significant look at increasing the basic benefit rates," Mr McKenzie said.

"The experience of 2020 gave us concrete evidence that if you give people more money, they will manage better."

As with the rest of New Zealand, housing is a major cause for concern in Dunedin, where rental costs have grown "massively" in recent years.

"A lot of the people we work with in Dunedin are having huge problems with housing," Mr McKenzie said.

Just this week, he had dealt with several young men who had found themselves homeless, for a variety of reasons.

"And the options for these people are limited — perhaps a very short-term stay at the Night Shelter and being navigated to boarding houses."

The number of people on the social housing register continued to grow in Dunedin, as housing affordability worsened.

Nationally, there were 22,400 people on the social housing register in November, the southern region having 505 people.

In September 2020, Dunedin city had 253 families on the social housing register.

Mr McKenzie said it was good to see the Dunedin City Council working on the issue, initially through the Mayor’s Taskforce for Housing, and following up with alterations to its 2GP Variation 2 plan change to make more space available for building houses.