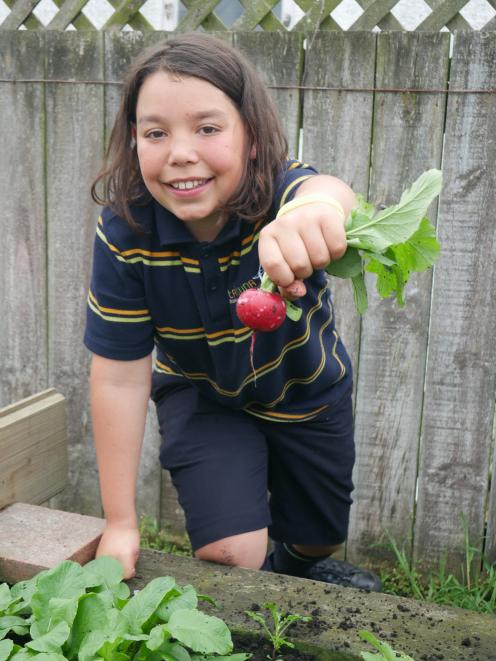 The Tahuna Normal Intermediate School pupil wanted to do more to protect the environment, so got an idea to create more vegetable gardens around the city.

He wanted to see more planter boxes in suburban areas which people could add to and take from.

So, last year, he presented a 15-page report with his ideas to Dunedin Mayor Aaron Hawkins.

He expected Mr Hawkins to be "staunch" but he was quite nice, Caius said.

Mr Hawkins liked his ideas and suggested he start the project at his school.

The council loved the idea, so Caius, with Mr Scoles’ help, set up a garden club, Caius said.

They were allowed to use a vacant gardening space in the school, which had raised planter boxes and tunnel houses.

The area was overgrown, so the group spent a couple of weeks cleaning it up.

"My group is so hard-working and they do what they can."

They spend two to three days in the garden each week composting, weeding and growing vegetables.

Some of the vegetables they grow include lettuce, potatoes, radish, corn, silver beet and chillis.

Caius was proud of how much he had achieved in such a short space of time.

"It feels great. I thought this would have been too big of a project for me ... it’s shown me what I can really do, especially when [I] put [my] mind to it."

In the future, Caius hoped it could be used in the school’s food technology department and for hangi in marae week.

Most of the fresh produce is given to Food Harvest.

Mr Scoles said while the idea was not a new one, Caius jumped at the chance to utilise the school’s equipment.

"It’s just good having kids that are keen to do a bit of the hard work and try to help out other people as well."

Mr Hawkins said Caius’ idea to make the city better was one of the best ones he had heard.

"We’re lucky to have so many compassionate and capable young people in Dunedin, challenging us all to lift our game," he said.