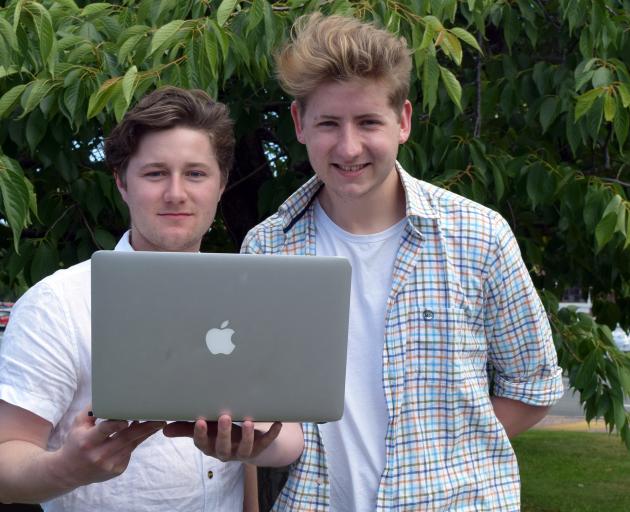 University of Otago students Alex Thomson (left) and Gabriel Dykes are developing their business Split, a platform to allow people to make a small investment in horticultural enterprises. PHOTO: SHAWN MCAVINUE
For Startup Dunedin's latest nine-week Audacious programme, University of Otago and Otago Polytechnic students take an idea to solve a problem and make it a business. In this series, business reporter Shawn McAvinue talks to students who won prizes for their ideas. This week he talks to Split co-founders Alex Thomson (21), of Dunedin, and Gabriel Dykes (20), of Wellington, about the development of their investment platform.

Mr Thomson said the platform would allow anyone to make an small investment in a range of horticultural enterprises, which raise capital through the wholesale market.

"If a company is building a cherry orchard we want everyday Kiwis to be able to invest in that development."

When cherries from the orchard started selling, the investors got a share of the profit.

New Zealanders with a small amount of money to invest should still be able to invest in the sector, he said.

"We always hear about how good New Zealand produce is but nobody knows how to invest in New Zealand’s own prosperity and we believe everyday New Zealanders should have the ability to do that."

Mr Dykes said the potential return from the industry was between 10% and 12%, which was "really attractive", especially when compared to term deposit interest rates.

The capital raised on the platform would help bridge a funding gap for the sector after restrictions were placed on overseas investment, Mr Dykes said.

"Retail capital should go a long way to filling that gap," Mr Thomson said, as the platform would allow people to invest in a range of different horticultural enterprises.

A diverse portfolio would spread the risk and minimise the impact if a subsector, such as cherry growing , was hit by a bad season.

For example, the impact of a hailstorm on a cheery orchard in Central Otago could be offset by a bumper manuka honey season elsewhere.

Mr Dykes said he expected the digital platform to be developed by late January, with the aim of launching it by early 2022.

Split won the App Prototype award of $10,000 in services from Aule, a Dunedin digital agency.