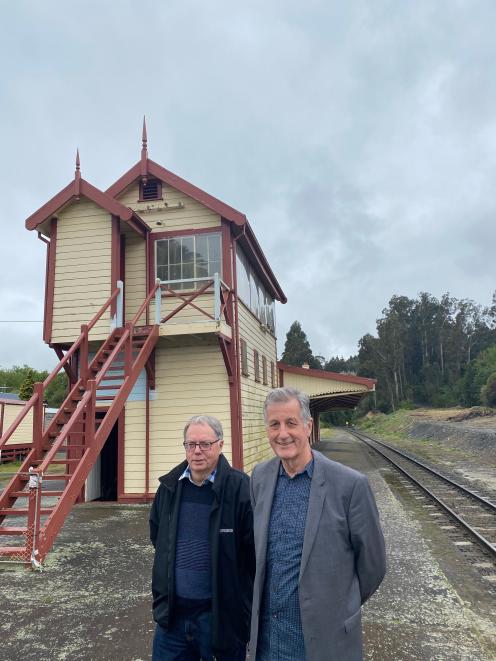 Rail Heritage Trust of New Zealand executive officer Barry O'Donnell (right) and South Island field officer Bruce Shalders visit the Wingatui Station this week to discuss the foundation repair project and other maintenance issues for the historic building. PHOTO: BRENDA HARWOOD
The historic Wingatui Railway Station, which has stood between two railway lines in rural Wingatui for more than 100 years, will be upgraded in the hopes of attracting a tenant.

Owned by the Rail Heritage Trust of New Zealand, the station is about to undergo repairs to its signal box foundations, earthquake strengthening, and will be given a spruce up, as part of a planned upgrade.

The Trust was recently awarded a $12,500 grant from the Otago Community Trust towards the cost of replacing the foundation timbers of the signal box, which have rotted in the wake of a flooding event.

Trust executive officer Barry O’Donnell, who visited the station this week to check its condition, said the state of some of the signal box foundation timbers was discovered last year.

"The decision was made to replace the entire foundation below platform level, as part of the upgrade, so the station can be tenanted and open to the public," Mr O’Donnell said.

"We are very grateful to the Otago Community Trust for its support."

The trust had made provision for the foundation replacement, budgeted at about $90,000, and work was expected to start around mid-November, he said.

Inside the station, the main issue was the need to strengthen the two masonry chimneys to earthquake code compliance, he said.

The Wingatui Station, which has a Category 2 historical classification from Heritage New Zealand, is a rare surviving example of an island-platform station — a railway station which stands between two tracks.

The Dunedin-Mosgiel line opened in 1875, and may have had an original building, although the existing Wingatui Station building was constructed in 1914.

The accompanying signal box was built the previous year to service the junction with the Otago Central Line, at the west end of the station.

From 1967 Wingatui was an attended flag station, manned for signalling purposes, and in 1986 it was closed except for operating purposes.

The Wingatui Station is one of three owned by the Rail Heritage Trust of New Zealand — the other two are Moana Railway Station on the West Coast, and the Railway Goods shed in Greytown.

The Rail Heritage Trust of New Zealand was established in 1991 in response to concerns that significant New Zealand rail and heritage buildings could be lost unless efforts were made to conserve them.