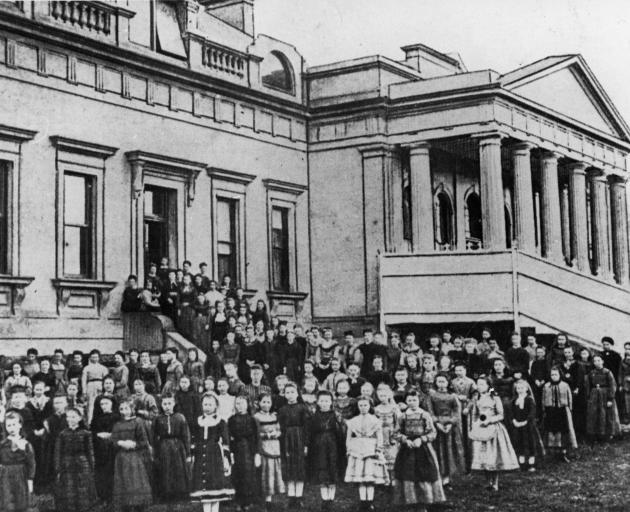 A photograph of the first-day pupils on February 6, 1871 shows a 7ft (2.1m) high fence to keep girls separate from boys of Otago Boys’ High School. PHOTO: OTAGO GIRLS HIGH SCHOOL
It took a 7ft  (2.1m) high fence to satisfy the moral concerns of Victorian parents but when Otago Girls’ High School opened on February 6, 1871, it helped open up a whole  new level of education for girls in New Zealand.

Otago Girls’ High School archivist Jane Smallfield said the school opened with 78 pupils, aged between 8 and 19. Space was made available for the girls school in the southern block of the Otago Boys’ High School, in Tennyson St.

Before the school opened, a five-foot  (1.5m) fence was erected to keep the boys and girls apart, Mrs Smallfield said.

This prompted several  letters to the editor in the Otago Daily Times, one declaring it would be an ineffectual partition that could be ‘‘jumped over by an active urchin’’.

Before the school opened, the fence was raised and topped with pointed ornamental finials, increasing the height to about seven foot tall, ‘‘to keep the boys and girls totally separate,’’ Mrs Smallfield said.

The formation of the school was largely due to Learmonth Whyte Dalrymple, who campaigned ‘‘for years and years’’ to establish a high school for girls, Mrs Smallfield said.

‘‘She is considered the founder of our school.’’ Learmonth Dalrymple wrote in the Otago Daily Times in 1869 spelling out her view, ‘‘It is premised, in the matter of education, that the claims of youth on the state, irrespective of sex, are equal’’.

She urged for ‘‘an institution for girls in every respect analogous in quality and degree’’ to the Otago Boys’ High School that would allow girls to be equally well trained and ‘‘exercise their intellect’’.

When it opened it was the first state high school for girls in the southern hemisphere, Mrs Smallfield said.

Due to the Covid-19 pandemic last year, the high school had to postpone official 150th jubilee celebrations in February.

They will now take place at Labour weekend  and registrations are open at 150th.otagogirls.school.nz.