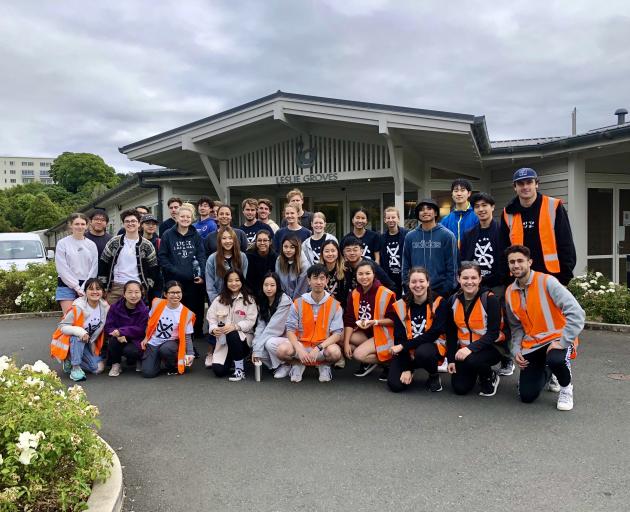 Members of the Otago Student Volunteer Army after doing some garden maintenance at a retirement home earlier in the year. PHOTO: SUPPLIED
Dunedin students are doing their bit to help the community.

The Otago Student Volunteer Army was officially launched this year with the aim of bridging the gap between Dunedin students and the wider community.

The club is part of the nationwide Student Volunteer Army (SVA), which also operates in Christchurch, Wellington and Auckland.

Otago club president Paris Fan was pleasantly surprised when more than 300 University of Otago and Otago Polytechnic students signed up via the app.

‘‘I never would have imagined we would have so many sign-ups,’’ she said.

The Otago club recently became part of SVA’s Groceries Service, delivering to those in need during the pandemic.

That includes essential workers, older people, those who are self-isolating and people who require extra assistance.

During the year, the club has worked on a range of ‘‘platoon projects’’ with community organisations.

That included a bike workshop with the Malcam Charitable Trust, composting at Otago Polytechnic’s Popopo Wormporium, and mentoring.

In July, the club went on camp to work with the Wakatipu Restoration Trust, continuing the work of the University of Canterbury SVA club last year.

‘‘We’ve really appreciated lesser-known, yet valuable community organisations reaching out to us for help and we’ve loved being able to provide that people power, as well as learn of the different issues they are tackling in our communities with their mahi.’’

The club has also combined with existing volunteering groups in Dunedin to further enhance the volunteer culture in the city, Ms Fan said.

The club was looking for new members to join next year’s executive.

People were welcome to apply before September 3, even those with little to no volunteering experience.

‘‘I reckon once you catch the volunteer bug it never really goes away.’’