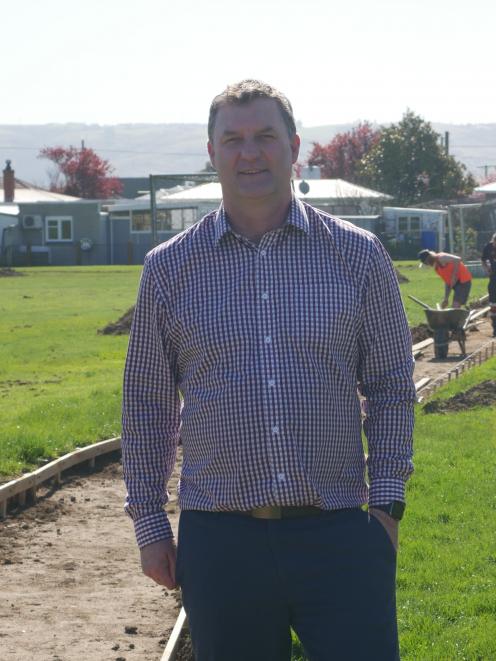 Elmgrove School principal Chris McKinlay stands by the school's new bike track, which is under construction. PHOTO: JESSICA WILSON
Elmgrove School pupils will soon have a new space to ride their bikes.

A new bike track is under construction around the school field and work on a pump track will start once that is finished.

A pump track is a circuit of rollers, banked turns and features designed to be ridden completely by riders pumping — generating momentum by making up and down body movements, instead of pedaling or pushing.

School principal Chris McKinlay said pupils were excited to see the bike track start to take shape as they had been talking about it for a long time.

The idea had been in the pipeline for about two years, and pupils were consulted on what they wanted included.

"They can actually see it come to fruition," Mr McKinlay said.

The first phase, which was the large bike loop, was expected to be finished in about a week.

Then, work on phase two — the pump track — would begin.

Hopefully, the project would be completed by week four of next term, Mr McKinlay said.

"The kids are very excited."

The bike loop will be asphalt, so it could be used by pupils on bikes and scooters, or to run on.

It would also have several offshoots with ramps and jumps.

Mr McKinlay said once the project was completed, it would be a community space that families could enjoy.

It would be a great place for children to learn to ride their bikes, he said.

The school received funding from Bikes in Schools, the Mosgiel-Taieri Community Board and the Otago Community Trust, as well as doing its own fundraising.