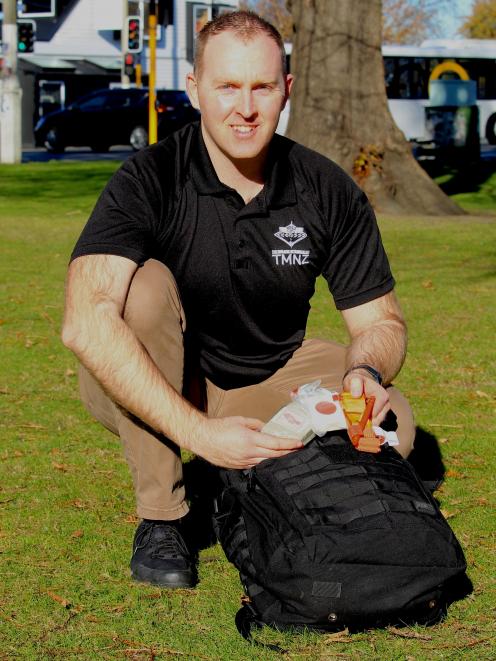 Kaitiaki Ora Tactical Medicine New Zealand president Alex McDonald says carrying a few simple first aid items could save a life. PHOTO: SIMON HENDERSON
The terrorist attack on Christchurch mosques, the  Whakaari/White Island eruption, the Christchurch earthquake — these are tragedies that shock everyone involved. A recently formed group aims to help those first on the scene to sharpen their skills at the cutting edge of disaster, reports Simon Henderson.

The first few moments of an unexpected disaster are crucial for survival.

The Dunedin-based president of the group is Alex McDonald.

He is a captain in the Royal New Zealand Army Medical Corps with 15 years’ experience, including deployment to East Timor and Iran.

He has also been a volunteer ambulance officer with St John for the past 12 years.

Tactical medicine is an approach that helps first responders prepare for situations where there is a threat to the rescuer.

Threats can be anything from a natural disaster to a terrorist or rogue shooter.

"We consider threats to be anything that could potentially cause harm to the responder.

"Earthquakes, landslides, tsunamis, as well as violent crime and violent criminals, so it’s quite a broad category."

His vision was a standardised tactical medicine capability for New Zealand.

In unexpected events, the first people on the scene are often everyday citizens.

Three first aid items Alex McDonald keeps in his backpack are (from left) gauze, pressure dressing and a tourniquet. PHOTO: SIMON HENDERSON
"We would like to take them from being a passive bystander to being an immediate responder."

A key aim was to "stop the bleed", Mr McDonald said.

"You can die in ten minutes from an arterial bleed."

Programmes used around the world could be introduced to New Zealand to teach people how to recognise life-threatening bleeds.

"In the time it takes for a police officer or an ambulance to arrive on scene, someone could probably die from a bleed which is easily preventable by applying a tourniquet or applying pressure to the wound, so that is the first link in the chain."

Mr McDonald said this in no way minimised the essential work of emergency responders, and a core focus was supporting police, ambulance services, Fire and Emergency New Zealand and the New Zealand Defence Force.

Empowering other groups to think in a tactical way could help reduce deaths in the first moments of disaster.

Some examples could be providing tactical medicine training to high-risk groups.

"The trucking industry, for example — how many car crashes do they come across every day?"

Another example was the recreational firearms community.

"If every hunter knew how to use a tourniquet, and stop a bleed ... what's the chance that a hunter is just around the corner when one of these incidents happen."

"What we are really after is changing a mindset, and that mindset is around making good decisions to render aid based on the situation around you."