By Shawn McAvinue
0 Comments
A retired Dunedin carpenter has been thinking outside the box for his latest project.

Warren "Poppa" Ockwell (84), of St Kilda, said he always needed to have a project on the go.

When he retired as a carpenter and joiner about 20 years ago, he began creating mobiles for Rainbow Preschool to feature in its display at the Dunedin Santa Parade.

Since retiring, he has created 14 mobiles including a squadron of biplanes, a batmobile, Spider-man and Barbie-themed cars and Thomas the Tank Engine’s friends.

When Covid-19 put this year’s parade in doubt, he decided to focus on another project — building his own coffin. 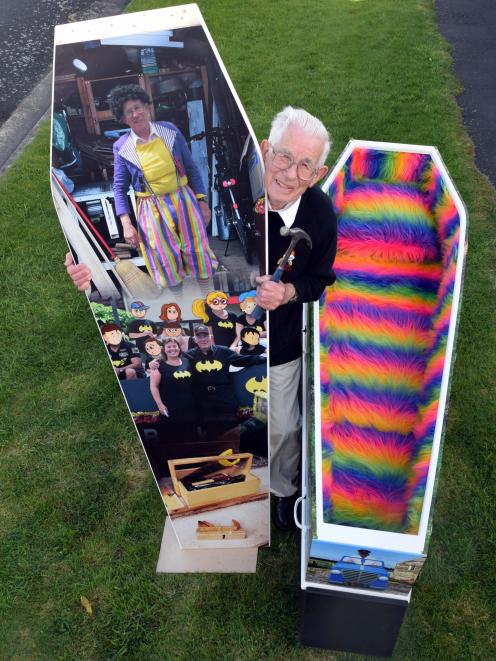 Retired carpenter and joiner Warren ‘‘Poppa’’ Ockwell (84) has had a change of tack for his next building project. Renowned for making floats for Rainbow Preschool for the annual Dunedin Santa Parade, Poppa is putting down some of his tools and has made one final creation — his own coffin. But, don’t worry, Poppa assures us he is still fighting fit. PHOTO: SHAWN MCAVINUE

"I’m exceptional for my age."

To build the coffin, he used the skills obtained during his career, which he started aged 15.

Before he told his family about the coffin project, he asked his son to come to the garage to help him take some measurements.

To his son’s surprise, on entering the garage, he found his Dad lying on a piece of wood — destined to be a coffin floor — and the project was revealed.

The project was now complete, the exterior of the coffin decorated with pictures taken at past parades including an image hugging his daughter, Wendy-Anne Jarvis, who works at the child-care centre in South Dunedin.

As a nod to the centre, the coffin has a fluffy rainbow-coloured lining and pillow.

He thanked everyone who helped him realise his vision for the project.

The day he puts the coffin to use, the plan was for it to be taken on a Harley-Davidson hearse from South Dunedin to a crematorium in Mosgiel.

But now his coffin was finished, his next project was to maintain his fleet of mobiles so they were ready for the parade. Some of the mobiles had tyres "as flat as a pancake" and even flatter batteries, he laughed. 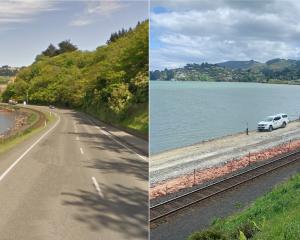 SH88 project progress on the table