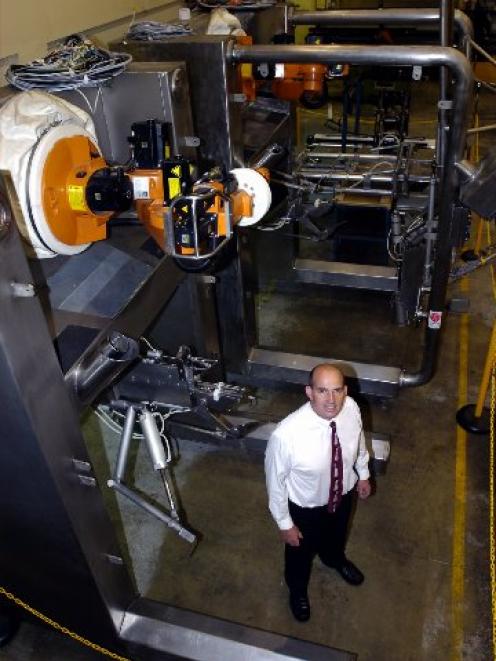 High on the collaboration list is working with the University of Otago and also AgResearch's scientific hub at Invermay; the latter under threat of losing 85 of 115 jobs over three years through restructuring.

In the past decade, Scott has invested heavily in research and development in a variety of new fields, with assistance from government aid, and has opened new markets in meat-processing robotics, the mining sector and latterly the dairy industry.

Although operating in Dunedin had its downsides, being so far from many markets, managing director Chris Hopkins said to produce high-value exports Dunedin suited Scott, with its quality manufacturing base and skilled workforce.

''The biggest challenge is increased effort required to maintain contact with customers face to face.

He was asked what the Government stance on regional development should be, given the outcry over Invermay's proposed restructuring and job losses.

''It would seem logical and equitable that investment or expenditure by Government should be spread across the communities [country wide] in proportion to where the taxes and revenues come from,'' he said.

He said Scott received trade assistance from government agency New Zealand Trade and Enterprise, the wider government research and development grants, plus ''very good support'' from the Australian Government for R and D in the red meat sector.

''These have all helped us to expand and diversify,'' Mr Hopkins said.

''To ensure we can grow, we need to operate across a range of industries. We are expanding these where we see a fit and where we can present credibility to that industry,'' Mr Hopkins said.

A good example for Scott's expansion was in meat-processing automation, where it achieved ''real credibility'' from joint-venture partner Dunedin-based Silver Fern Farms, and working with Millers Mechanical to provide excellent equipment to the sector.

''What we believe we need to do going forward is to better leverage off the wider intellectual capital within the local community, including the university and the likes of Invermay,'' Mr Hopkins said.

Several factors contributed to Scott maintaining its southern presence, with product diversification, particularly into meat processing and dairying, having given the company more reason to be in the South, plus staff skill levels were high and retention and loyalty were good, Mr Hopkins said.

''We would [however] like to see growth in the size of the talent pool,'' he said.

Scott adds to that pool through training programmes for apprentices and cadets, in mechanical and electrical engineering, in robotics and advanced machine vision.

Scott supports robotics in schools through the RoboCup challenge, where the southern competition ''is one of, if not the, largest in the country'', Mr Hopkins said.